The harlequin duck is a small sea duck or diving duck. It takes its name from the French word harlequin a colourfully dressed character, characterized by his chequered costume. Harlequin ducks breed in Alaska and Yukon, south to Wyoming, California, and Massachusetts, from southern Baffin Island and Quebec south to Labrador and the Gaspé Peninsula. They also breed in Greenland and Iceland. They winter along the coasts of the Bering Sea Islands, Japan, Korea, China, California, and from southern Labrador to Long Island. Harlequin ducks live along fast flowing streams and rivers in rocky terrain with plenty of vegetation, such as trees, during breeding season in the summer. — animaldiversity.org

I find harlequins regularly along the Atlantic ocean shore by Barnegat Bay jetty New Jersey, during the winter. Mostly in small groups of 3 to 5 pairs.
They eat primarily an animal diet of crustaceans, mollusks, insects, and small fish. They are one of the prettiest ducks on the water. 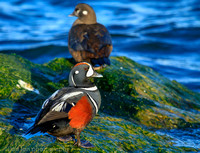