The New York Botanical Garden is one of my favorite places to visit throughout the year. Just before the trees and the plants start to wake up from the long winter months, from early March and ongoing to almost the end of April, the NYBG puts on a dazzling display of some of the most exquisite orchids in the world.

Now in its 16th year, the Orchid Show takes place in the Enid A. Haupt Conservatory where a wonderful and imaginative display of orchids is put on by the NYBG. The highlight of the Orchid Show is a creative series of orchid installations by Daniel Ost found throughout the conservatory. Ost is one of the worlds leading floral designers, garden architect and floral artist. A short clip by Ost on the challenge of creating the installations at the NYBG is here.

Exotic and unique in appearance, orchids represent a rare and delicate beauty. Wether a potted plant or a cut flower arrangement, orchids have an irresistible appeal. If wanting to make a lasting impression with a unique flower, the orchid would be a perfect choice.

This is the first time that I got to have a close look at these gorgeous flowers and spend three days in the conservatory visiting during the day and also attending the Orchid Evenings show when the NYBG creates a special evening by setting up fire pits in the conservatory plaza to keep those waiting to get in warm (there were no lines when I was there), entertains the visitors in the conservatory with three Orchid Dancers from Alice Farley Dance Theather and of course the stunning displays of orchids all accompanied by curated music by DJ X-Ray making for a perfect atmosphere to explore the Conservatory with friends or loved ones while sipping from a glass of wine.

From my very limited experience with growing plants, I seem to remember that orchids have a reputation for being a challenging and finicky plant to grow and maintain. After going to the Orchid Show and doing some reading, I discovered that orchids are some of the most diverse and well adapted plants on Earth. They thrive in many environments around the world, from rain and tropical forests to deserts. They grow in almost any color, size and shape imaginable. With 30,000 naturally occurring orchid species and tens of thousands of artificially created hybrids, Orchidaceae is the largest plant family on Earth. About 208 species of orchids are native to the United States and Canada as well as a number of hybrids. Orchids tend to bloom for quite a bit longer than most other flowers. The average orchid bloom, regardless of species, usually lasts for at least six weeks. Others last for months.

Can one grow an orchid from seed? Growing orchids from seed at home is NOT easy at all. Seeds are generally almost microscopic and very numerous, in some species over a million per capsule. Seed growth is done in the highly controlled environment of a laboratory. Even if you are successful at orchid seed germination, it takes a month or two for the first tiny leaves to develop, and may take many months or years before you’ll see the first bloom. It’s easy to understand why orchids are so expensive! In recent years they have become much more popular and affordable. I see them for sale at Trader Joes and most supermarkets all the time.

Some interesting facts about orchids:

✿ The genus Orchis comes from an ancient Greek word meaning 'testicle'; because of the shape of the bulbous roots. The term 'orchid', which is just a shortened form of the family Orchidaceae, was not introduced until 1845.
✿ The smallest orchid in the world features flowers that measure in at a little over 2mm wide. The flower petals are transparent and are only one cell thick. This teeny tiny orchid belongs to the Platystele genus.
✿ The tiger orchid (Grammatophyllum speciosum) is the world's largest type of orchid. The biggest on record weighed roughly 4,000 pounds. One hanging in the Brooklyn Botanic Garden is 12 feet wide, weighs 300 pounds and has hundreds of flowers blossoming on 17 spikes.
✿ Orchid seeds are the smallest seeds in the world and are comparable to the size of a particle of dust. Each orchid seedpod can contain millions of orchid seeds.
✿ Some orchids strangely resemble creatures from the animal kingdom. Ophrys apifera, better known as the Bee Orchid, lures male bees with its enticing smell and bee like appearance.
✿ The vanilla extract we pour into all those cake and cookie recipes? It comes from the orchid! Vanilla is a species of orchid, and vanilla extract comes from the orchid Vanilla planifolia. It’s the only orchid that produces a fruit that can be eaten.
✿ The tallest variety, the Sobralia altissima from the forest of Peru, can soar to 44 feet.

I also took advantage of a one day workshop on orchid flash photography offered by the NYBG. Link to that blog post here. 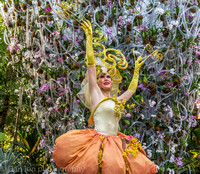