Lesser and greater yellowlegs. The two yellowlegs species are very similar. Size is marked different when they appear together and can be compared against each other. Greater yellowlegs's bill appears slightly upturned and blunt-tipped, while lesser yellowlegs's bill is straight and sharp-pointed. Voice also may be a distinguishing character: greater gives three or four piercing notes, lesser two rapid, softer short whistles (sometimes two or three) sound here. At ponds and tidal creeks, this trim and elegant wader draws attention to itself by bobbing its head and calling loudly when an observer approaches. In migration, the greater yellowlegs is common from coast to coast. Usually it is a pleasure to watch as it feeds actively in the shallows, running about on trademark yellow legs. —animaldiversity.org; audubon.org
Eastern willets are large, long-legged shorebirds. Their plumage is grey or brown overall and they have a distinctive white rump and broad, white wing stripe visible when in flight. They also vocalize in flight. Sound here. There are two distinct populations of willets that differ in distribution, ecology, and morphology: eastern willets and western willets. Western willets are larger and paler, eastern willets are slightly smaller and darker overall. Their vocalizations and habitats differ as well. Their bill and legs are grayish, but vary from light to dark. —animaldiversity.org 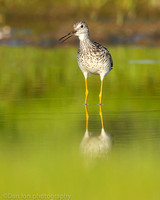