THE ROCK AND ROLL HALL OF FAME AND CLEVELAND

Thinking about going to Cleveland for a few days? Why? Why go to Cleveland on your vacation and spend time and money in a city that’s not even in the top 30 vacation destinations in the US? Also its reputation has not been very stelar in recent times. Cleveland prospered greatly from 19th century achievements. A vast hub for machinery and heavy industry companies. The economic boom of the 1940s and 50s didn’t last too long. It all started to go down in the late 1960s. Like in many other rust belt cities, manufacturing jobs vanished and the economy tanked. Racial tensions and riots did not help. In 1969 the pollution and industrial debris floating in the Cuyahoga River caught fire. Flames spread across the river, in some places reaching five stories high. On a positive note, that fire stoked the rest of the nation’s awareness of the environmental and health threats of river pollution and culminated in the creation of the Environmental Protection Agency. Then the city went into fiscal default in 1978, the first US city to do so since the depression. The economic recession of 2008 didn’t help either.

An effort to turn the city around began with the collaboration of civic, business and political leaders. New investments were made in many of the region's steel, automobile, and other manufacturing factories to make them more efficient and profitable. Cleveland is still a manufacturing town but plans to build new industries on the region's existing strengths and bring the city into a leadership position in science and research were also started. Developing a visitor/tourist economy became another priority. Major renewal projects such as Gateway (home to key professional sports teams), Playhouse Square, the North Coast Harbor with its Rock and Roll Hall of Fame, the Great Lakes Science Center, and the Cuyahoga Valley National Recreation Area came to life. The food scene begun to emerge in the late '90s and early 2000s making Cleveland’s pedestrian mall along East Fourth Street a respected food destination. The Republican National Convention arrived in 2016. And local sport teams also made a strong comeback. The Cavaliers were the first major professional sports championship won by a team based in Cleveland since 1964, and the first-ever championship won by the Cavaliers franchise. NBA Finals MVP winner LeBron James propelled the Cavaliers to the historic comeback. The Cleveland Indians won a World Series last in 1948 but won Central Division titles in 2016, ’17 and ’18. As for the Browns, well let’s not go there. The revival of Cleveland is in full swing. It still has a way to go especially for the areas outside center city.

It was my first visit to Cleveland. The main reason for the visit was the Rock and Roll Hall of Fame. I am very interested in the creations of its architect I. M. Pei. And like most of us I have listened to rock and roll since I can remember. Lately, I am focusing more and more on architectural photography. Old and new, though contemporary designs are more intriguing. And Cleveland has its share of both. For the old, Terminal Tower, Cleveland Trust Company Building, a 1907 building designed by George B. Post, the Arcades on 5th and 6th Streets that are unique and special. For the contemporary, the Rock and Roll Hall of Fame of course, Cleveland’s Museum of Contemporary Art (moCa) designed by Iranian-born Farshid Moussavi, Peter B. Lewis Building at Case Western Reserve University home of the Weatherhead School of Management, Frank Gehry architect, Tinkham Veale University Center on the campus of Case Western Reserve University, Perkins and Will architects and Rocket Mortgage FieldHouse, home of the Cleveland Cavaliers, recently completed a major renovation by architectural firms SHoP and Rossetti.

The Rock and Roll Hall of Fame is awesome. With so much to see and experience in the Hall, it’s very overwhelming. One day to visit is just not enough. I liked Cleveland a lot. And I have seen more than just the downtown area. Wide, well maintained and clean avenues and streets. Older buildings are being renovated and not demolished. A very good mass transit system. Free trolly rides in the downtown area. A vibrant University Circle district with all the cultural attractions and performing arts venues. People are friendly and not in a hurry. No overwhelming crowds or grid-lock traffic. Plenty of good restaurants and pubs. A lot of good things to see and experience in Cleveland. Would have no problem to spend another week there, perhaps in warmer weather. 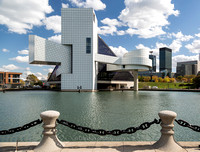