Among the most elegant of the herons, the slender snowy egret sets off immaculate white plumage with black legs and brilliant yellow feet and frantic foraging behavior. Those feet seem to play a role in stirring up or herding small aquatic animals as the egret forages. Occupying a great variety of habitats, the snowy egret feeds in many types of permanently and seasonally flooded wetlands, streams, lakes, swamps and man-made habitats, as well as coastal marshes, shallow bays and mangroves.
—allaboutbirds.org; arkive.org

Showy egrets are fairly common on Long Island. I have observed them trying to catch fish in ponds and marshes. I have seen 4 to 5 different methods of catching pray. This one in the gallery below was something else. Don't know if it was overly excited or very inexperienced. From its behavior I think it was supper excited. It couldn't make up its mind as to which fish to catch and it was clear that it didn't want to miss any of them. In the end it didn't get too many in all that excitement!
The one in Jamaica bay also showed extreme behavior. Aggressive behavior that is. It was feeding in a shallow pond. As soon as another snowy would come within 100 feet it would get extremely irritated, take flight, and in a highly aggressive manner would proceed to chase the other snowy. That went on for quite a while. Highly territorial and aggressive. Bad sport! 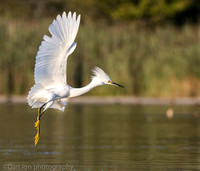