In the past couple of years as I drove over the Queensborough bridge to make my way into and out of Manhattan I noticed a great deal of construction going on just south of the bridge on Roosevelt Island. At first it was fairly low level construction, maybe five stories high. But later on I noticed the building of a residential tower growing close to the bridge rising up at a fast rate. In a few short months it was higher than the level of the bridge. I knew that the City of New York led by then Mayor Mike Bloomberg offered the land to Cornell University for the development of a new campus with technology at its foundation. The Cornell Tech campus opened in 2017.
I decided to take a couple of days and revisit Roosevelt Island and spend a few hours checking out the Cornell Tech campus.

A short history on how Cornell Tech got to build on Roosevelt Island, and more details on the campus and the architecture of the buildings in my blog here. 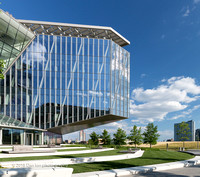