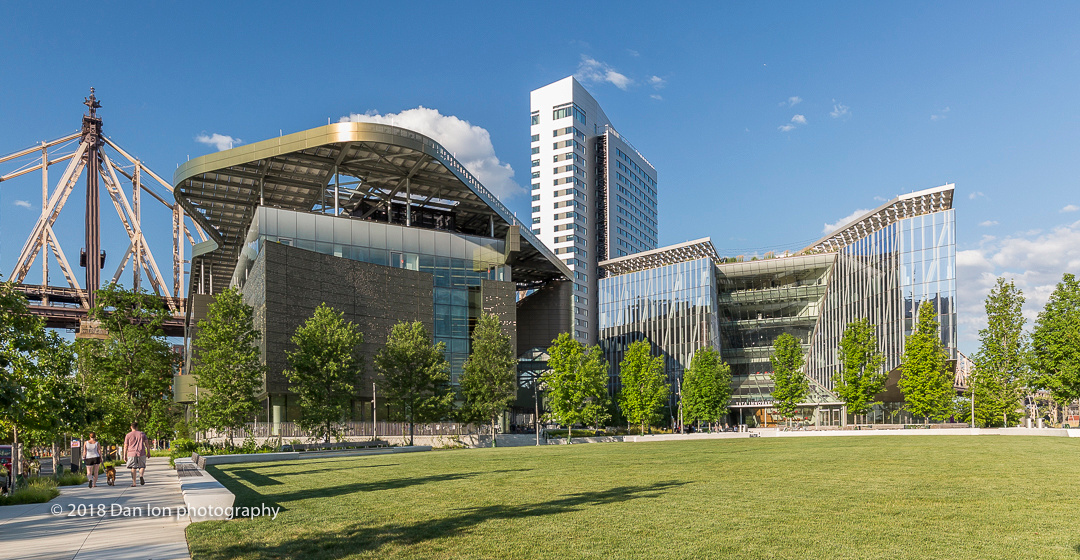 In the past couple of years as I drove over the Queensborough bridge to make my way into and out of Manhattan I noticed a great deal of construction going on just south of the bridge on Roosevelt Island. At first it was fairly low level construction, maybe five stories high. But later on I noticed the building of a residential tower growing close to the bridge rising up at a fast rate. In a few short months it was higher than the level of the bridge. I knew that the City of New York led by then Mayor Mike Bloomberg offered the land to Cornell University for the development of a new campus with technology at its foundation. The Cornell Tech campus opened in 2017. I’ve been on Roosevelt Island many times. Beautiful little jewel of an island with long walking alleys lined with cherry- blossom trees next to the East River with a fantastic view of its much bigger sister Manhattan, especially at night. At the very south end is the beautifully designed Franklin D. Roosevelt Four Freedoms Park. And at the very tip of the north end, Roosevelt Island Lighthouse, a stone lighthouse (currently non functioning) built by New York City in 1872, now on the national register of historic places since 1972.

I decided to take a couple of days and revisit Roosevelt Island and spend a few hours checking out the Cornell Tech campus. I also took the 45 minute campus tour give by Cornell. It is given weekly. I enjoy discovering and studying architecture a lot. From the ultramodern like the Crystal in Ontario, Canada (here) to the Etruscan residential architecture in Italy (here) 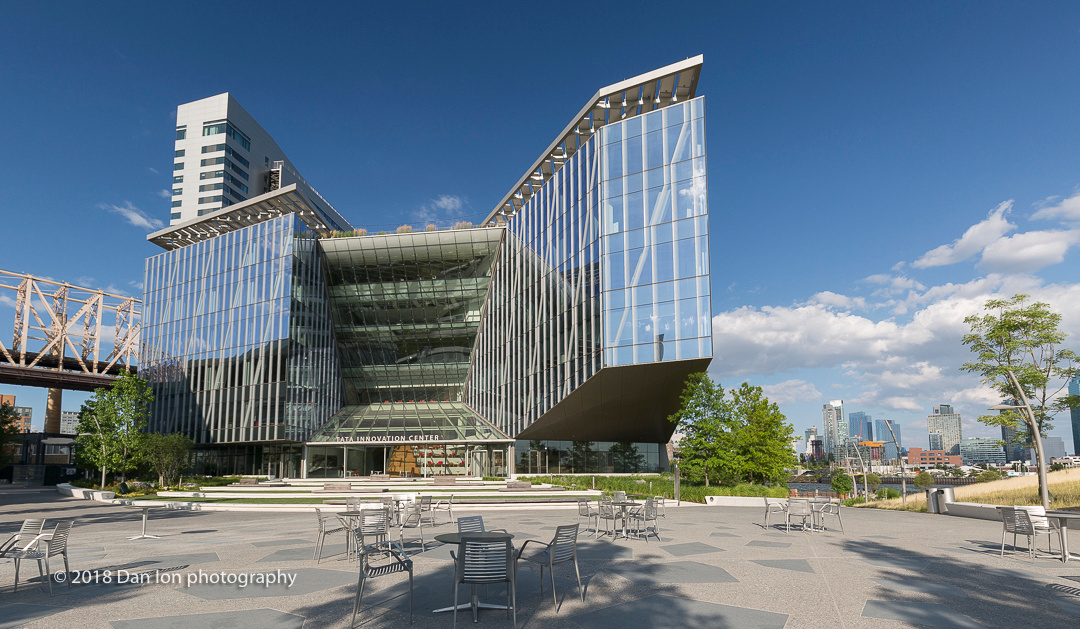 A short history of how Cornell Tech got to build on Roosevelt Island.

In 2010 the City of New York went searching for a university strong in engineering and applied sciences to build a new research institute and issued a challenge to institutions from around the world. Then Mayor Mike Bloomberg sweetened the deal by offering real estate for the university at almost no cost along with $100 million in infrastructure upgrades. The result was  18 proposals from 27 outstanding institutions from six US states and 8 countries. Early 2011, Stamford university was one of the front runners mostly because of it’s strong performance in launching start-ups and cooperation with Silicon Valley companies. To strengthen its position and perhaps to gain a slight advantage in the selection, it partnered with the City University of New York. Later in the year another university became a strong contender for the campus, Cornell University, the Ivy league institution from Iticha N.Y. As did Stamford, it also found a partner in Technion-Israel Institute of Technology. In December Stamford announced that it would drop out of the running while Cornell announced that it secured a $350 million donation toward the building of the campus. By the end of the month Mayor Bloomberg announced that Cornell and Techion had won the proposal. Since winning the proposal, Cornell Tech has raised more than $750 million towards the development of Cornell Tech. The $350 million donation came from Charles F. Feeney, a billionaire who founded Duty Free Shoppers. Irwin Jacobs, Qualcomm (the American multinational semiconductor and telecommunications equipment company that designs and markets wireless telecommunications products and services) founding chairman and CEO emeritus, and his wife, Joan, gave $133 million. Bloomberg Philanthropies donated $100 million. Make it a total of $850 million if we also count the $100 million from the city of New York for infrastructure upgrades.

The City of New York contemplated giving land for the project either on Staten Island or Roosevelt Island. Staten Island, a bit isolated, has a great deal of space, but the location of Roosevelt Island is unbeatable. A short tram ride, subway ride or a bike ride if you prefer will take you to Manhattan. And the proximity to so many corporations and businesses, cultural and educational venues made it an easy choice. 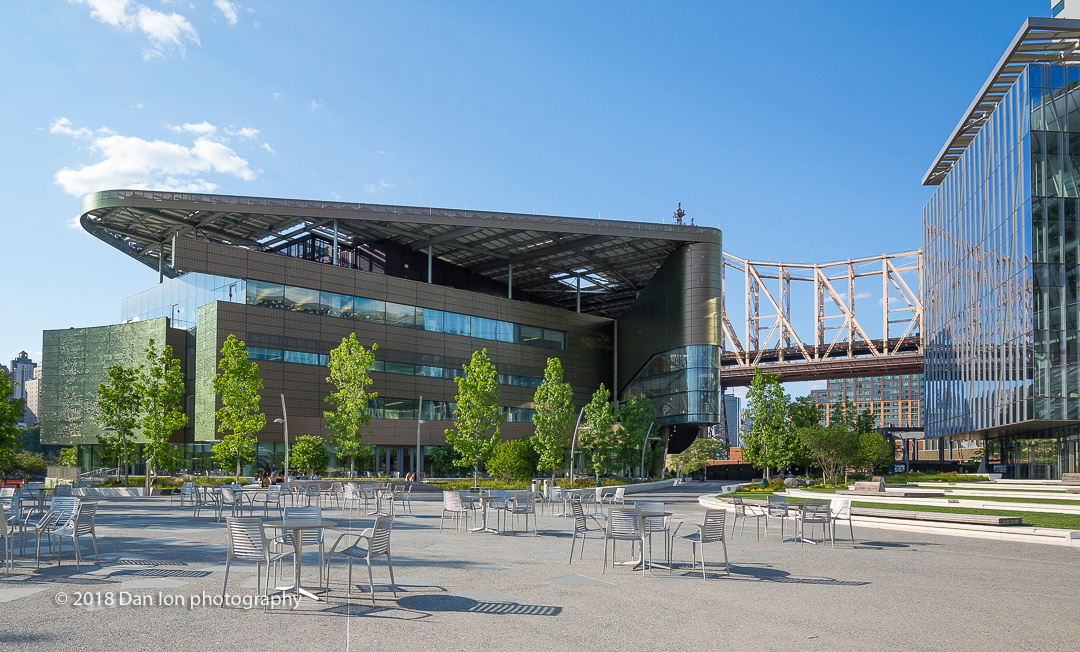 Cornell Tech is about connecting academia with commercial and non-profit organizations bringing them together to work for a better digital future. Cornell Tech offers graduate and post graduate education and research for the digital age integrating technology, business, law and design in service of economic impact and societal good. Cornell Tech’s focus on innovation is also reflected in the concept, design and building of its urban campus. It sits on 12 acres just south of Queensborough bridge, previously occupied by Goldwater Memorial Hospital, with expansive views in all directions, acres of green and public spaces. It is one of the most environmentally friendly and energy efficient campuses in the world.

Currently it is made up of three buildings, two of which are of a striking design.

The Bloomberg Center is Cornell Tech’s hub for learning. The four-story academic building, named in honor of the Mayor's daughters, Emma and Georgina Bloomberg, it is the intellectual center of the campus. Designed by Thom Mayne of the Pritzker Prize-winning firm Morphosis, the building is clad in a warm bronze-colored metal. The wall panels, designed and fabricated by Zahner, have small punched-out circles with tabs tilting them to various angles to form a background design, representing pixelated nature from a distance. Viewed from Manhattan the wall should show the New York City skyline. On the campus side, if you can get far enough, it shows the countryside in Iticha NY. The flat roof is a lilypad-shaped photovoltaic canopy. The design sets new standards for building performance and targeting Net Zero and LEED Platinum Certification. LEED stands for Leadership in Energy and Environmental Design, is a green building rating program. It operates under the umbrella of the U.S. Green Building Council (USGBC), a non-profit coalition of building industry leaders. The goal of the rating system is to encourage and reward sustainable design for—sustainable site choice, energy savings, water efficiency, reduction of CO2 emissions, and indoor environmental quality, among others—all while improving company profitability and employee well-being. Net Zero energy buildings combine energy efficiency and renewable energy generation to consume only as much energy as can be produced onsite through renewable resources over a specified time period. The aim at the Bloomberg Center is to have: 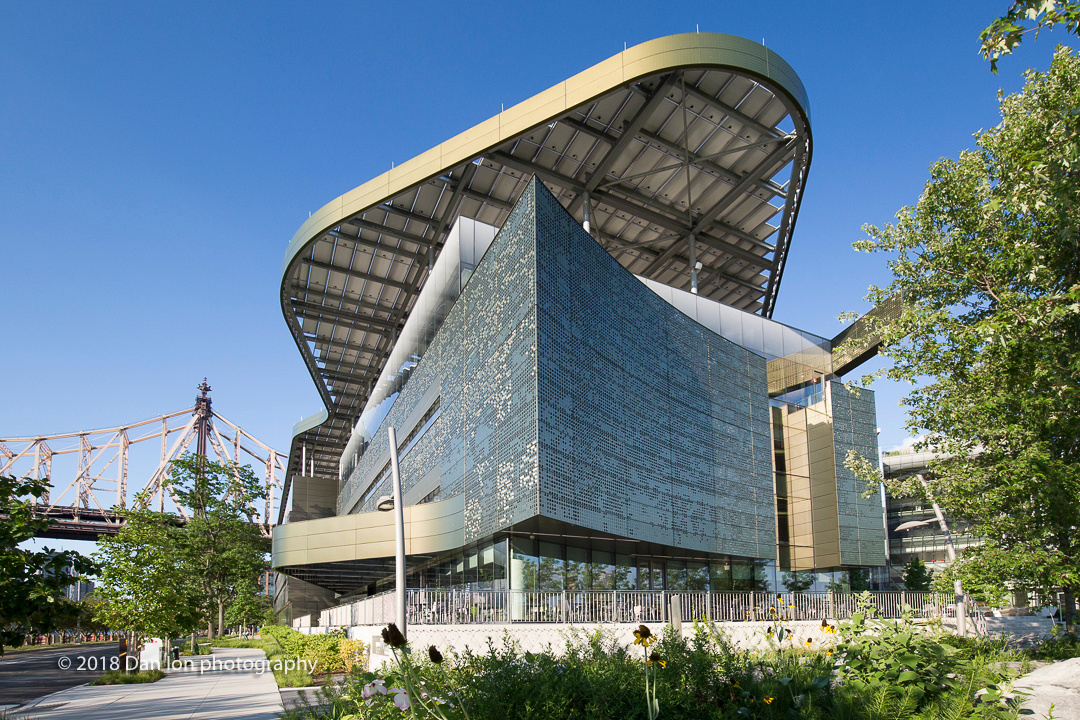 • An all-electric building: No fossil fuel is used in the building.

• Geothermal wells: 80 closed-loop geothermal wells, each 400 feet deep, were drilled below the main campus public open space. The electrically powered ground-source heat pumps are used to heat and cool the building in conjunction with an active chilled-beam system. 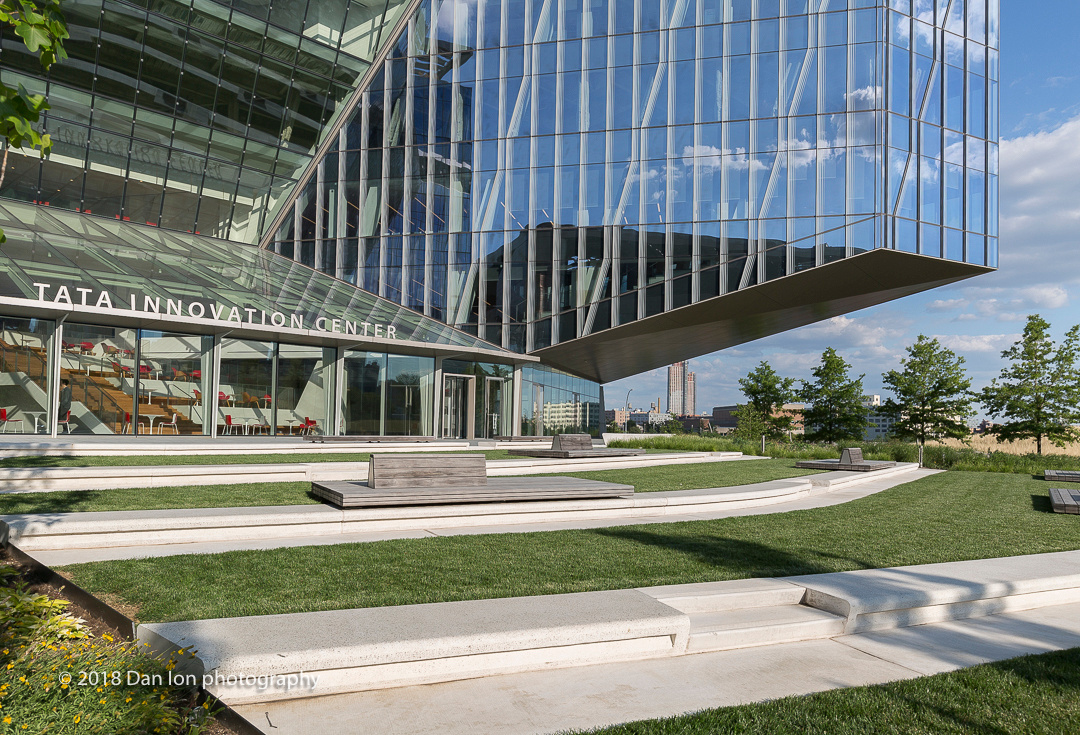 The Tata Innovation Center formerly known as The Bridge, is very different than the Bloomberg building. Designed by Weiss/Manfredi Architecture it has a central bowtie-shaped space that connects floors and collaboration spaces. Cantilevered wedge outcroppings at the north and south ends, interior views of the East River, an outdoor classroom on the building’s east side. The 245,000-square-foot building holds classrooms, labs and studios in its lower third. The upper floors will host technology companies and start-ups. The glass façade melds inside and out, allowing those inside to draw inspiration from river-to-river views throughout the interior of the building and from the rooftop terrace. It is built to LEED Silver sustainability standards. 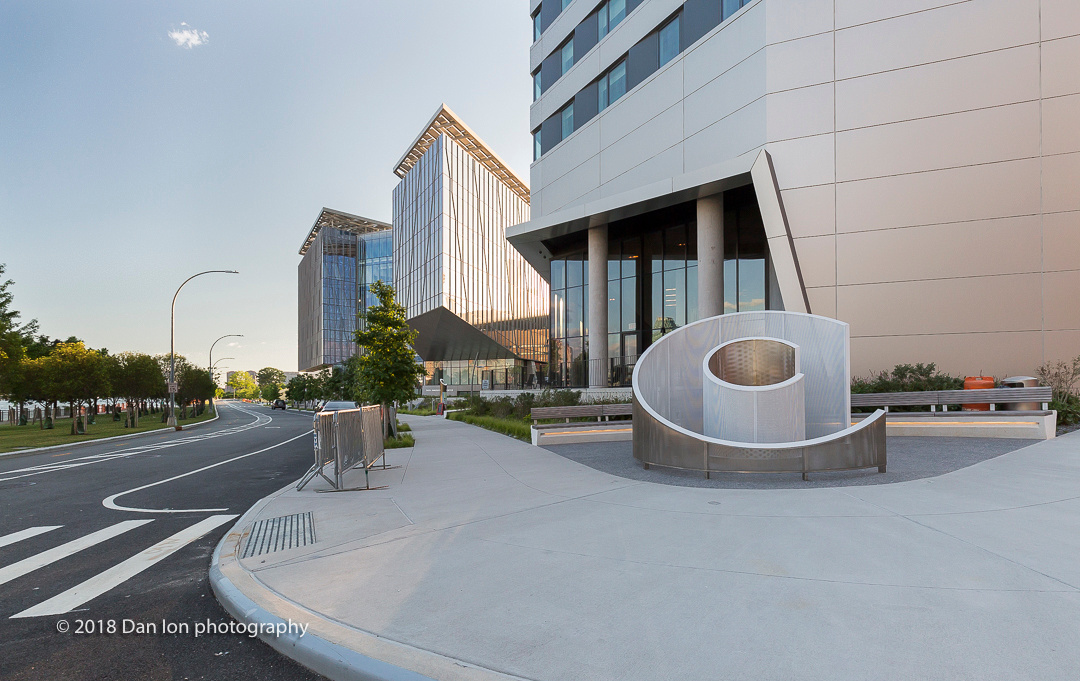 The House is the residential tower for students and faculty with about 350 apartments and about 500 beds on 26 floors. It was designed by Handel Architects to meet stringent Passive House standards that aim to achieve aggressive efficiency targets of 60 to 70 percent less energy consumption than a standard building. In order to achieve energy conservation targets, The House at Cornell Tech needed to be super insulated and tightly sealed, almost completely eliminating thermal bridging and reducing air leakage.

The House is the largest and tallest residential building in the world built to Passive House standards.

The building’s exterior shimmers, using a state-of-the-art, color-changing paint that, when reflecting light, naturally shifts color from silver to warm champagne. The façade, constructed of a prefabricated metal panel system, acts as a thermally insulated blanket wrapping the building structure. The wrap ends in a louver system that extends the entire height of the building. This reveal is designed to be the ‘gills’ of the building, providing an enclosed, louvered exterior space where the heating and cooling equipment live, allowing the building systems to breathe.

Purified fresh air is ducted into each bedroom and living room, providing superior indoor air quality. Use of low VOC-paint, which limits off-gassing and also improves indoor air quality, is used throughout the building, among many other elements. Compared to conventional construction, the building is projected to save 882 tons of CO2 per year, equal to planting 5,300 new trees. 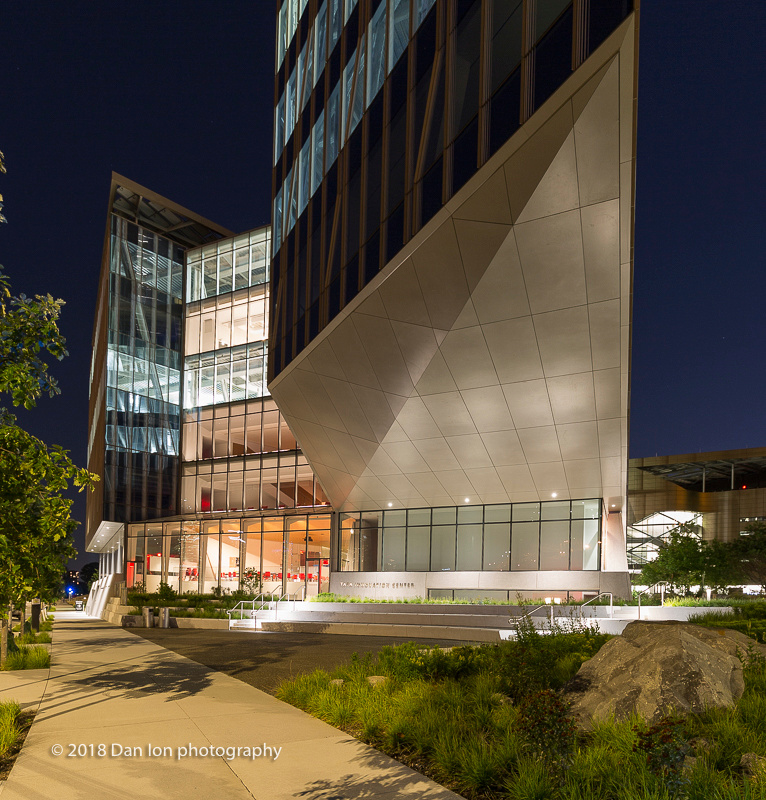 Two more buildings are scheduled for construction at the pressent time. Verizon Executive Education Center and Hotel.  The buildings are designed by Snøhetta and are the final part of phase one of the campus. The center will be a place for the entire tech community to gather, a convening place to leverage the impact the campus has on technology beyond its degree programs targeting young women in the undergraduate and graduate school pipeline that aims to increase the number of women working in technology.

The current campus is home to about 300 graduate students and 30 world-class faculty. When fully completed, sometime in the late 2030s to early 2040s, the campus will include two million square feet of state-of-the-art buildings, over two acres of open space, and will be home to more than 2,000 graduate students and 250 of faculty and staff. The future for Cornell Tech is very bright.

Many more images of the campus in the Cornell Tech campus gallery here.