Five months with a Great Horned Owl family
It is rare that one gets the chance to closely observe and spend that much time with the elusive and majestic Great Horned Owl. And in ones backyard too. That’s exactly what I experienced this spring and summer. Well, almost my backyard. Found them in Hempstead Lake State Park. It’s a five minute drive from where I live. So yes, I’ll call it my backyard if I may.

I knew a Great Horned Owl pair called home this state park for at least the last three years. On previous visits I rarely spotted one perched on a branch far into the woods in late afternoon. This spring I heard that they nested fairly close to a path and I went searching. Fairly close? That’s an understatement. I found them nesting in a very busy spot. On the edge of a meadow, in a tree right by a paved path frequently used by many walkers, bicyclists, skateboarders and dog walkers. Up about 60 feet in a very small nest. They are secondary-nest users, taking over existing raptor, heron or mammal (squirrel) nests.
There was the mother sitting on eggs. Or so I thought. She already had owlets by the time I first got there. Two, just about one to two weeks young. Two puffy balls of white down. Barely able to keep their eyes open or stand on their legs. And very, very hungry. There were a few spectators, some just walking by and of course photographers.
That was early March. For the next five months I watched them almost every day. From their first few days till they fledged and became independent and learned to fend for themselves expanding their territory by late July. An hour or so in the morning and a couple of hours in late afternoon. There was not much going on during the rest of the day when they were just roosting. As most owls they prefer twilight. These months were full of wonder, amazement, surprises, joy, near tragedy and a sad goodbye. I watched caring parents (mostly the mother) bring pray and feed them small bites early on. Watched them grow and start to move around the nest and open their tiny wings. Then near tragedy. They both fell out of the nest, way too early in their lives, followed by a rescue and relocation to a man-made nest. A bit later another fall and rescue. This time I played a small role in finding one of them, held him in my hands for a bit before he went back in the nest. That was very special. As they got bigger, branching came followed by fledgling. Always hungry and calling for their parents to bring them food. Always staying near one another. They were brothers, or so we believed. By the fifth month they started to become independent and fend for themselves. Most of the native down feathers were long gone replaced by the feathers of juveniles as they got close in size to that of their parents. A very handsome pair. Throughout these five months there was one constant that never wavered. The love and affection between mother and young ones and between the brothers. Never saw them fight over anything. Lots of loving looks, bonding, snuggling, kissing and ‘hand’ shakes. Yes, claw shakes.

By early July they became more elusive. They were harder and harder to find. The parents were mostly out of the picture. By middle of July I think they were gone, or so it seemed. Either to other parts of the park or possibly they just said good bye to their parents and the park and left in search of a territory of their own, though that usually happens in late August, early September. I searched for them a few more times in August with no luck. So it was a sad goodbye for me. I wondered if they stayed together or if they separated.

To write about the events mentioned above would take up too much space in this gallery introduction. I have written a couple blog posts detailing the major events in their young life. Link below. They are majestic birds that have a beauty and character not seen in many other raptors. The memories I have from them are priceless and will stay with me forever. After all, for five months we were a family! 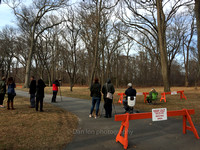