GHO owlets Falling out of the nest

When I first got there, mid March, people were not sure what was happening. Some said the mother was sitting on eggs. Others told me she had three chicks. I should have know that by that time the eggs must have hatched. Sure enough, a few days later I got my first glimpse of the two owlets, 2 to 3 weeks young. 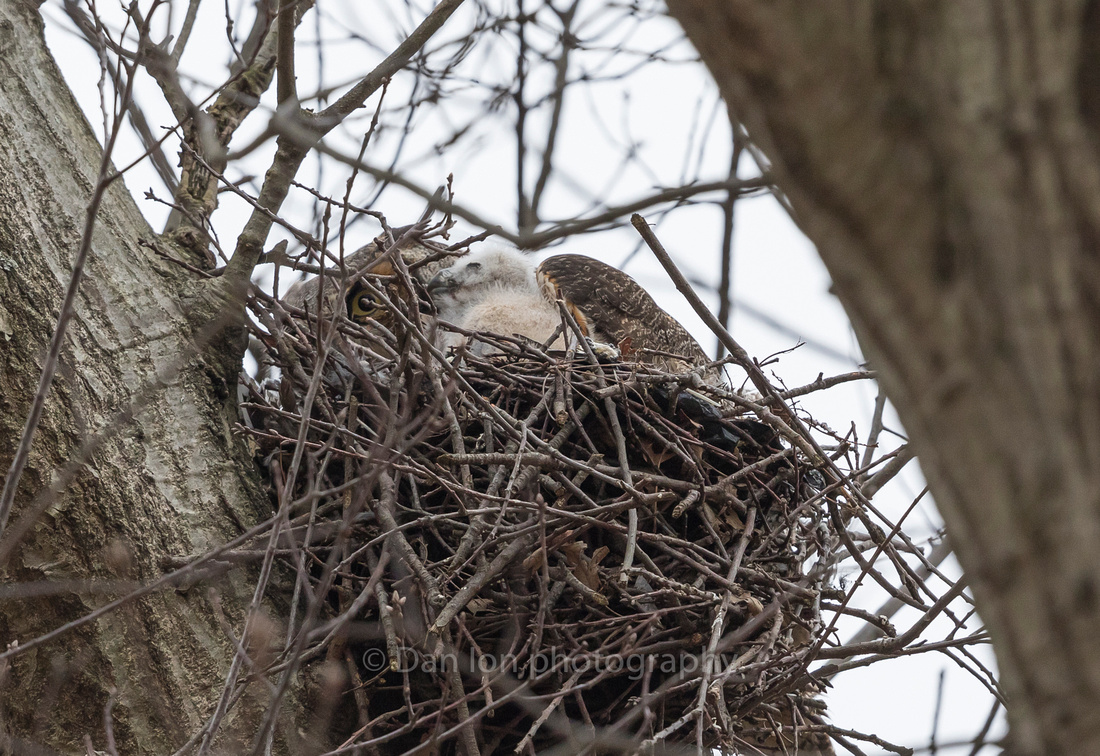 Whitish-gray down feathers, eyes mostly closed and barely managing to stand up. However the beak was a good size for young chicks. In such a small nest, there was not too much room even at this early stage. The mother would sit on the edge of the nest with the wings slightly spread to protect and keep her babies warm. She was occasionally agitated by all the commotion going on below the tree. At times there were 10 to 20 people near the nest.  Now and then she would leave the nest to take a break and rest on a nearby branch. 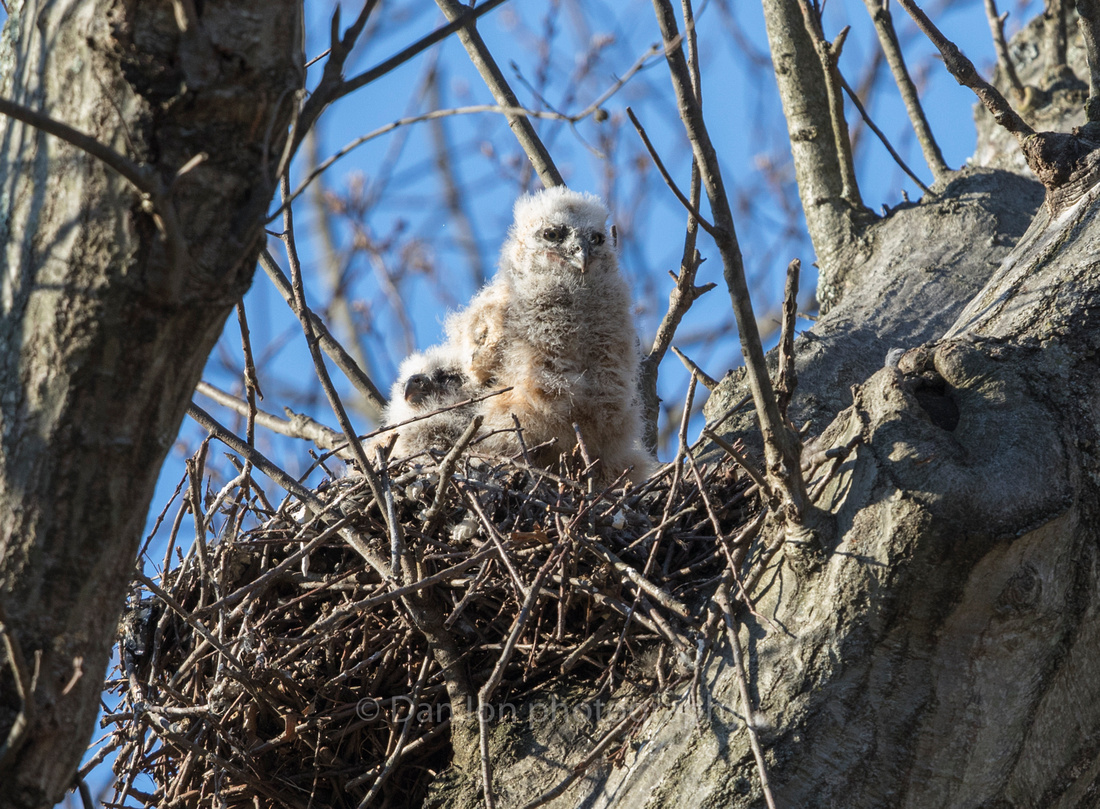 Great Horned Owlets. Looking over the world around them.

By the fifth week or so the owlets got bigger and started to find their way around the small nest sometimes getting close to the edge. Flight feathers began to emerge from their sheaths. Stretching and exercising their wings a lot. The mother would spend more and more time just off the nest on a close-by branch watching over the young ones. The space in the nest became smaller by the day. And then the fear that most of us had, became real. 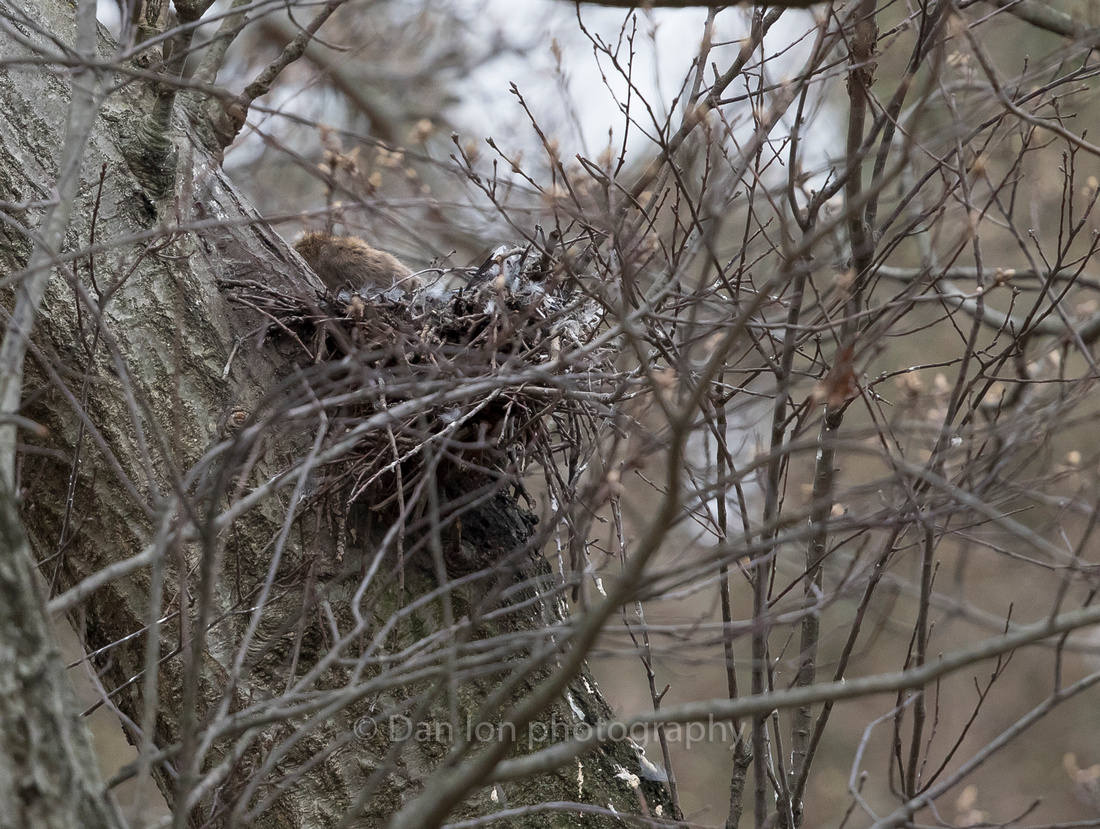 What? That's not an owlet. It's a dead rat. What happened!

They fell out of the nest. Actually that is not unexpected. Before they fledge, the owlets will start to hop and clamber on nearby branches. It’s called the ‘brancher’ or ‘jumper’ stage. The parents would feed them on the ground until they could get back in a tree. But for these two to fall out of the nest at this young age was just a bit too early. They were found the next morning in close proximity of the nest. 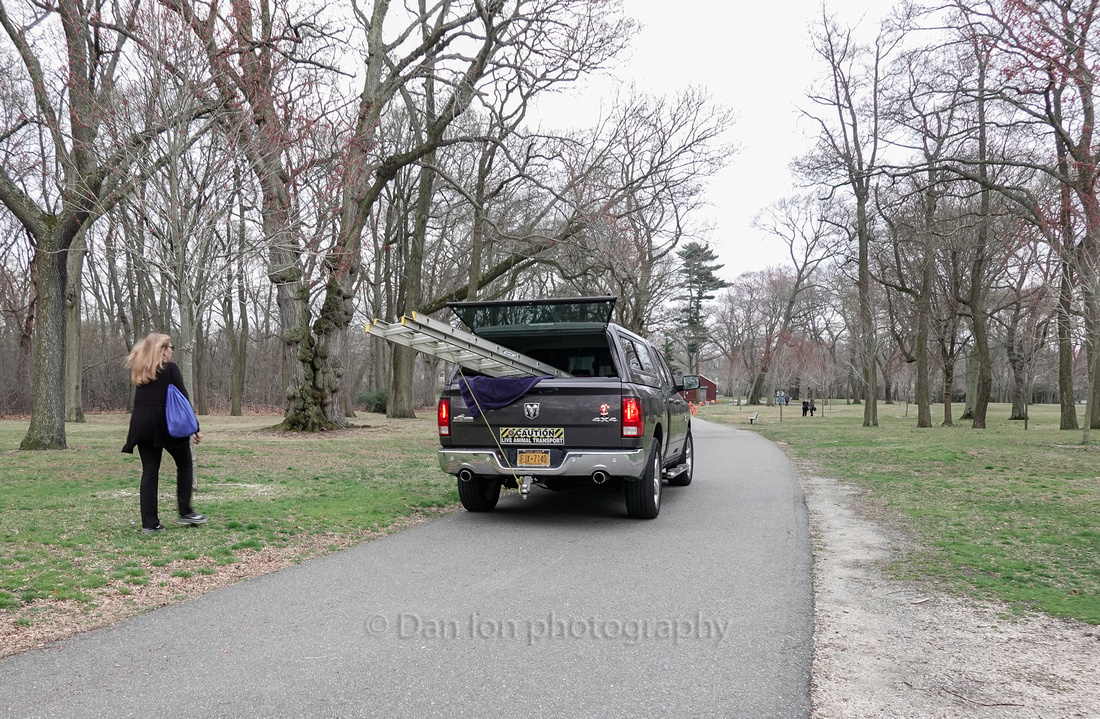 They fell from the nest. Found and rescued. Short rehab and back in the park in the rescue truck, April 13 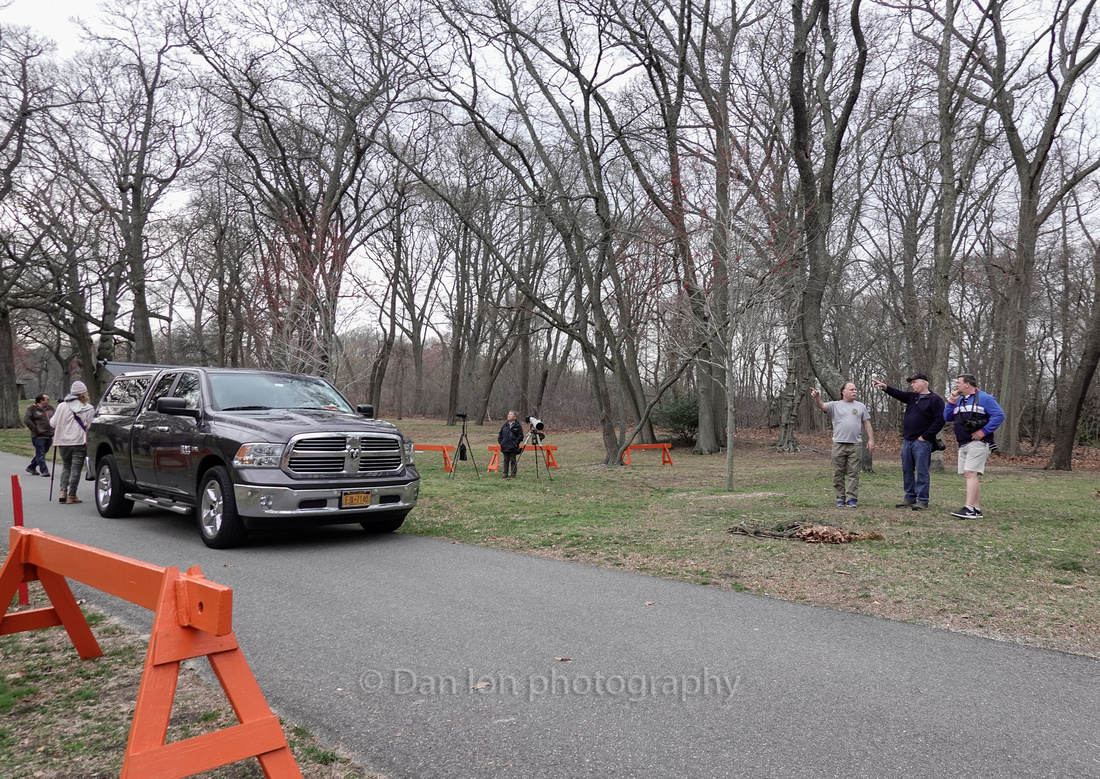 The rescuers planning for the new nest.

Caring and concerned people jumped into action and calls were made to WINORR, (Wildlife In Need of Rescue and Rehabilitation). Bobby Horvath and Cathy Spire took care of the displaced owlets. Minor injuries from the fall were checked out and given attention in a rehab facility. Of course the owlets were fed a diet of mice like never before. And not once did they refuse. I saw the mother in the days following the fall desperately looking for her babies. Sometimes with pray in her claws.

So the plan was to quickly get the owlets well and returned them to their parents. Using the same nest was out of the question. For one, it would be hard to reach and second, it was way too small and another fall would surely happen. Bobby Horvath, a NYC fireman and experienced licensed animal rescue and wildlife rehabilitator knew exactly what was needed. Relocating the owlets in a man-made nest of good size close to where the original nest was. Word got out that April 13 was the big day. 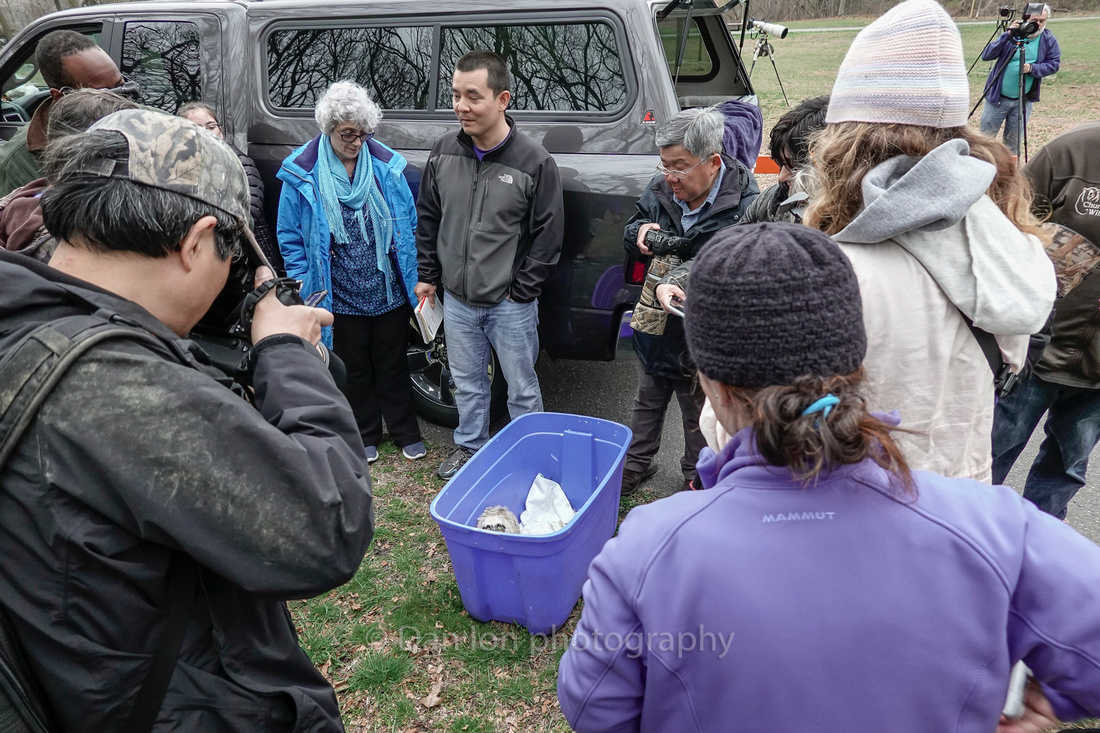 Wow! Everyone so happy to see them back and SO CLOSE! 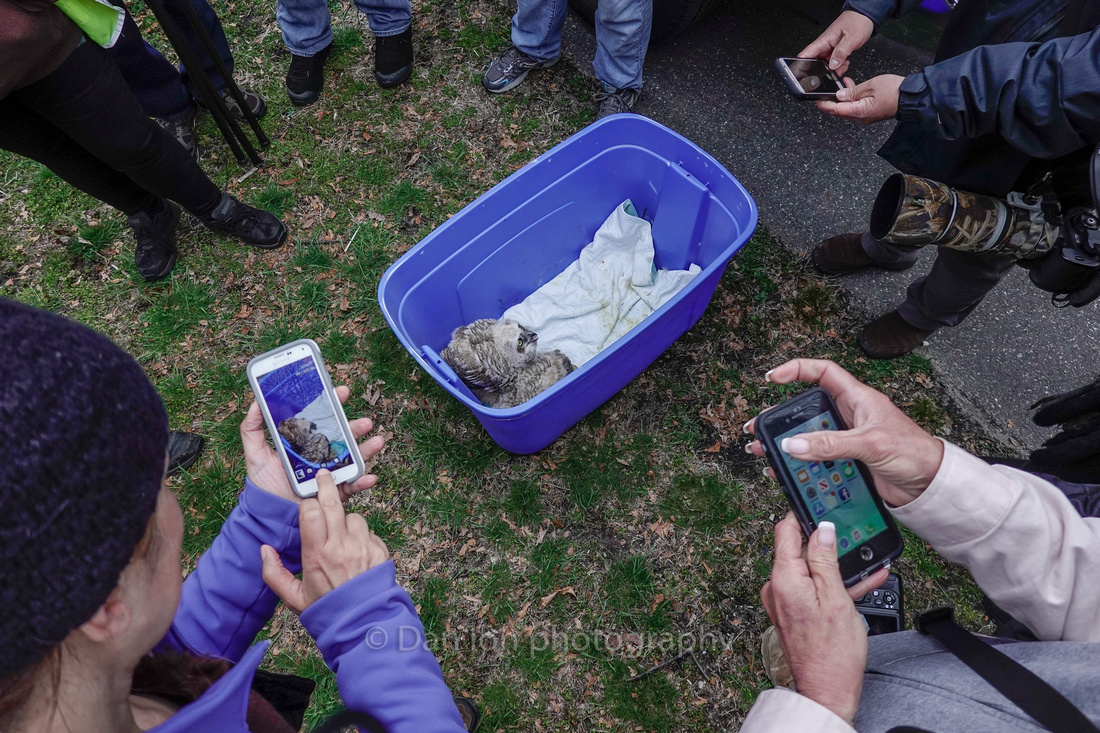 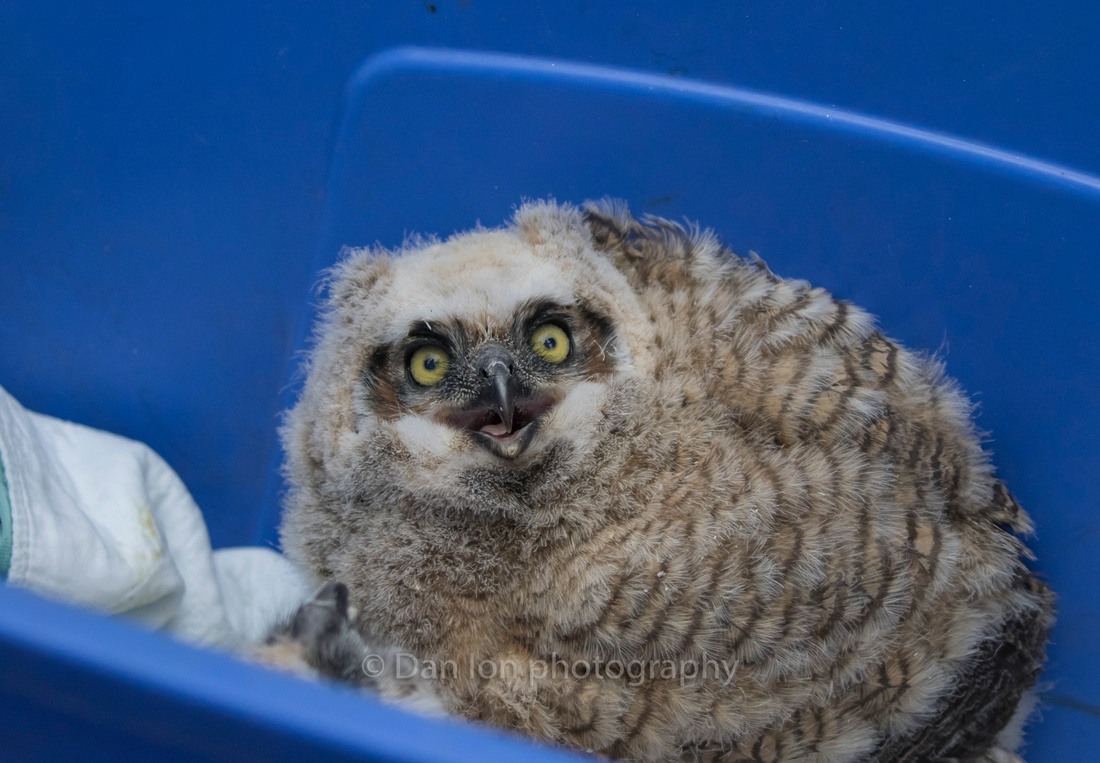 Terrified by all these creatures!

The owlets had a large following by this time and a lot of us were waiting for Bobby and the two rascals to arrive back in the park. And they came. We got a rare chance to see them really up close. Together in a blue bin, looking at us a bit frightened and distressed, hissing and making loud bill snapping sounds. They looked well fed and in good shape. Ready to go back up. Bobby already put together a box nest from some pine boards and a few natural pieces. Question was where will the new nest go?

A bit lower than the original nest but that ladder is only so tall!

A place that was within reach of Bobby’s ladder and a tree that would support branching. After a short debate and search a location was picked almost in the middle of the meadow on a branch about 20 feet high. A few twigs and leaves on the bottom of the nest and the new home was ready. Bobby and Jeff putting finishing touches on the new home. 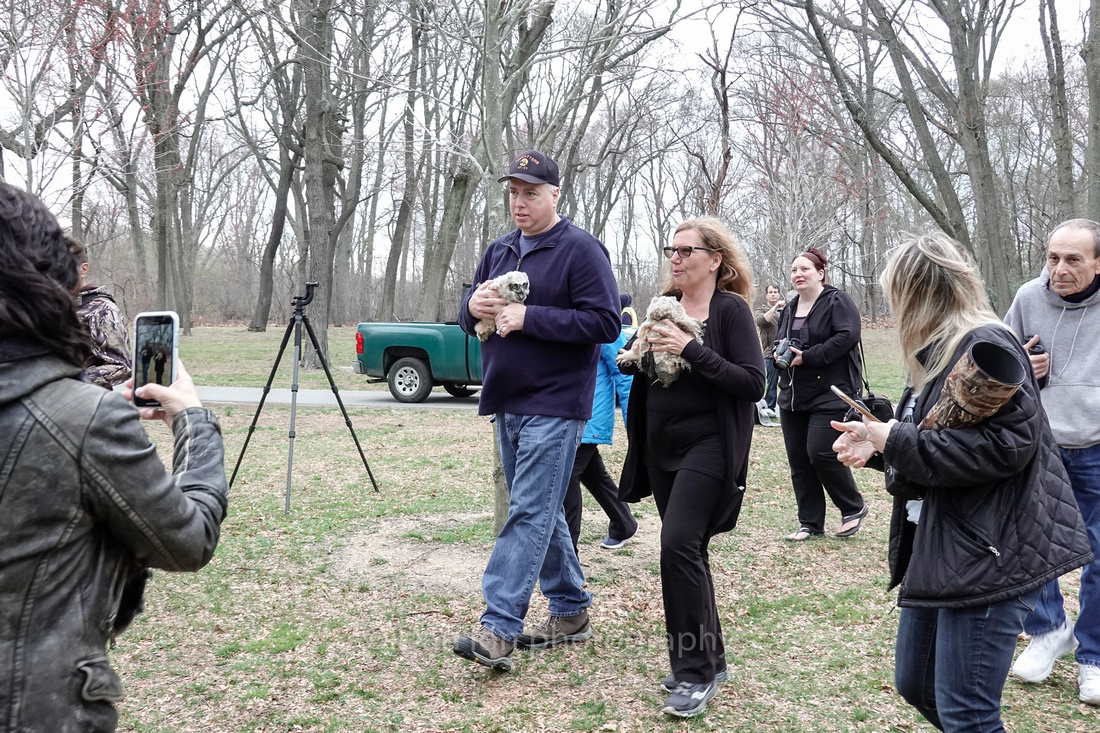 Fred and Laura have the honor 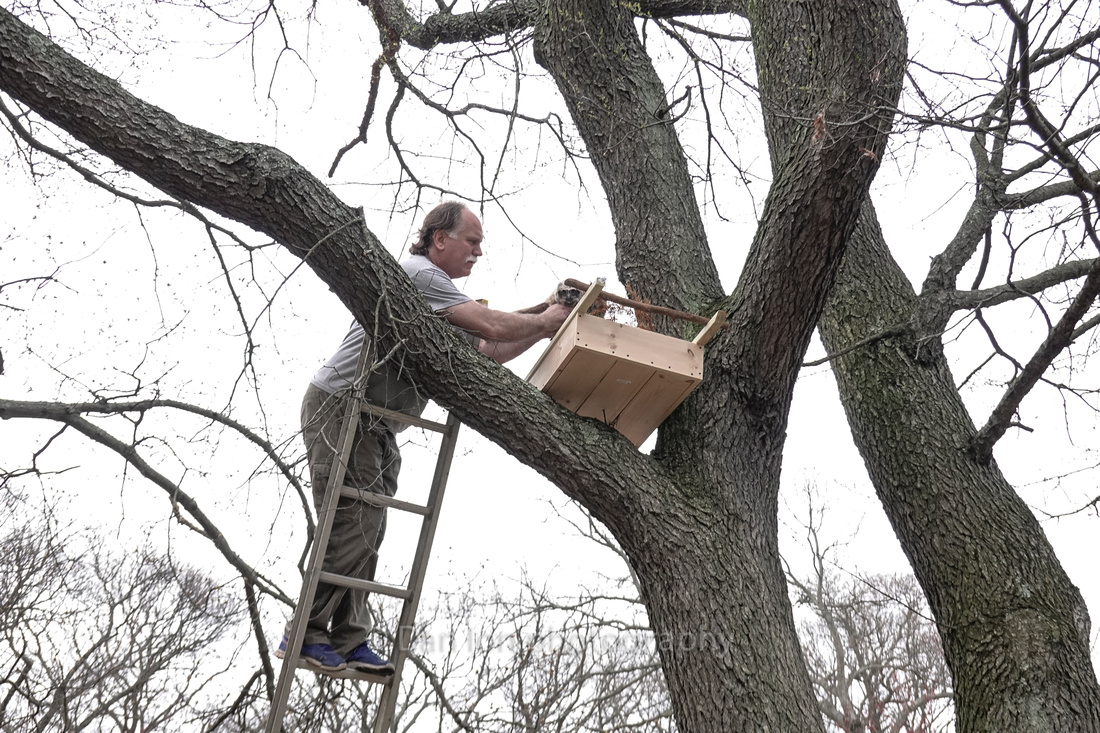 First one going up with Bobby.

Many last pictures with the owlets for everybody, one last check from Bobby and up they went. Probably very relieved to get away from all the people and cameras. Their last five days must have been very stressful. The fall, strange places, examinations and x-rays, people all around them. No complaints about the food though! 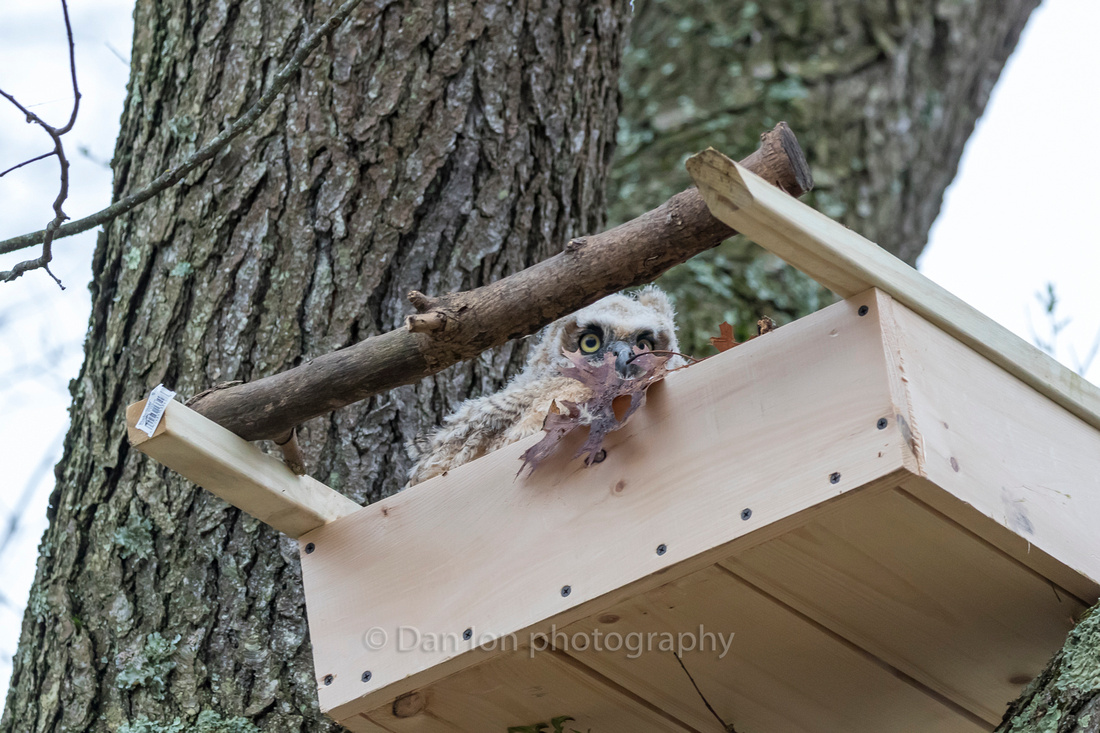 So would the parents find them, want them and continue raising them. A strong and definite YES! Within a day the mother bought food and spent time in the new nest with them. They all got accustomed and comfortable with the new accommodations and life went on for them. 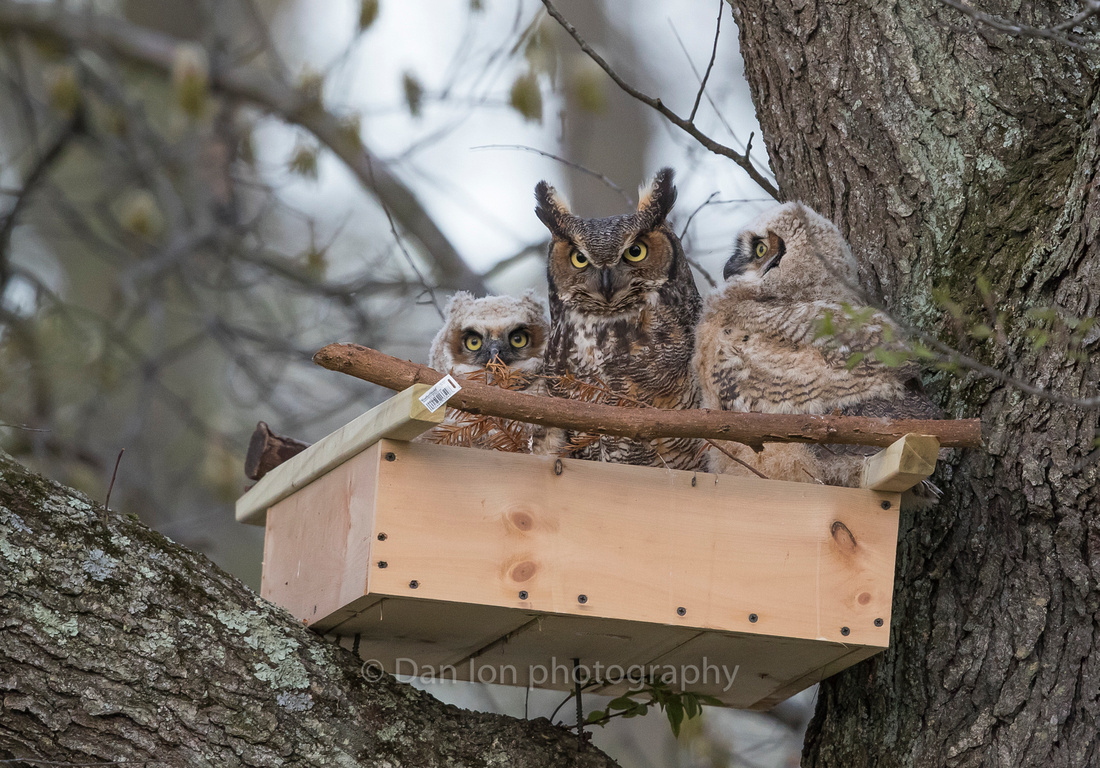 Great Horned Owl mother checking out the new nest and the youngsters.

An enormous thank you to Bobby, Cathy and the other people who were part of the rescue, rehabilitation and relocation of the two owlets. People with kind hearts for wildlife devoting personal time and effort to preserve the precious creatures around us. You are the best!