This past May I took a five day trip to the shores of Delaware bay to witness two of the most epic migrations on the North American continent. One is made up of almost a million shorebirds. Mostly Semipalmated Sandpipers, Ruddy Turnstones and Red Knots rufa. The other migration is made up of millions of Horseshoe crabs. The shorebirds are on a journey that stars at the bottom of South America at Tierra del Fuego, and ends up in the Arctic. The Horseshoe crabs start at the bottom of Delaware Bay and are looking to get to its beaches especially at high tide a few miles away. 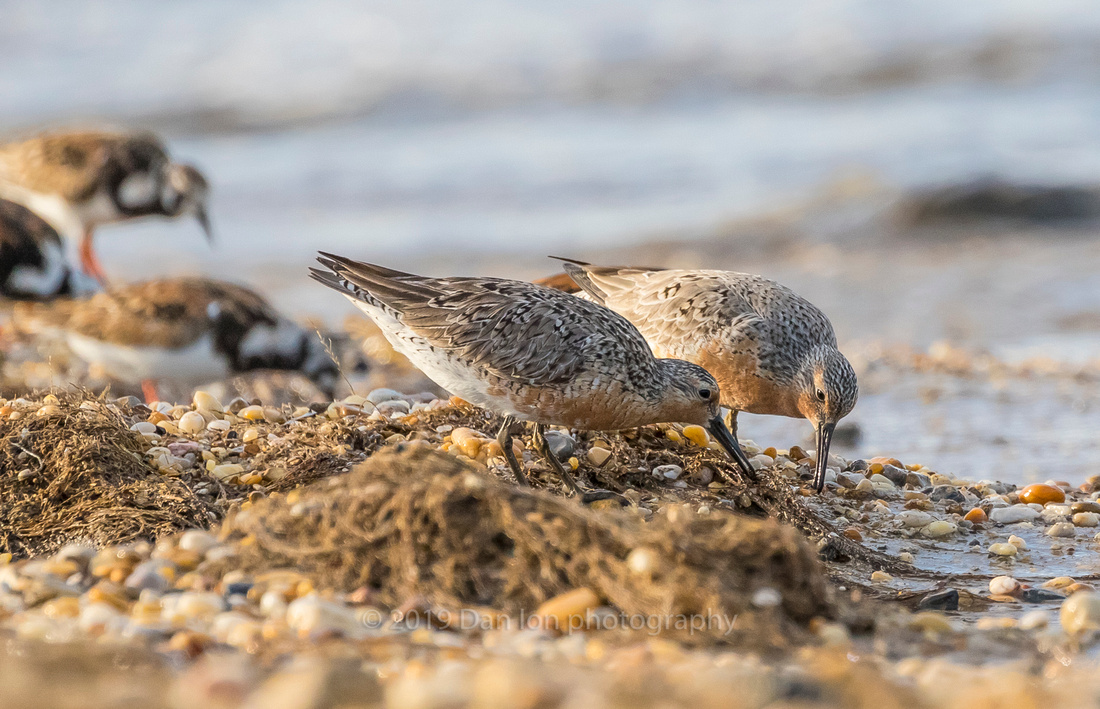 The Horseshoe crabs, by the hundreds of thousands make their way as far up the beach as they can to spawn. They deposit millions of eggs on the sandy beaches of the bay. About the same time almost a million shorebirds on their way to the Arctic where they breed and nest, arrive, need to rest, feed and regain their strength on this very long journey. They need to double their weight for the last leg of the migration, 2,000 miles north to the Arctic. They will feed on the horseshoe crab eggs non stop every day till they are fat enough to resume their journey. 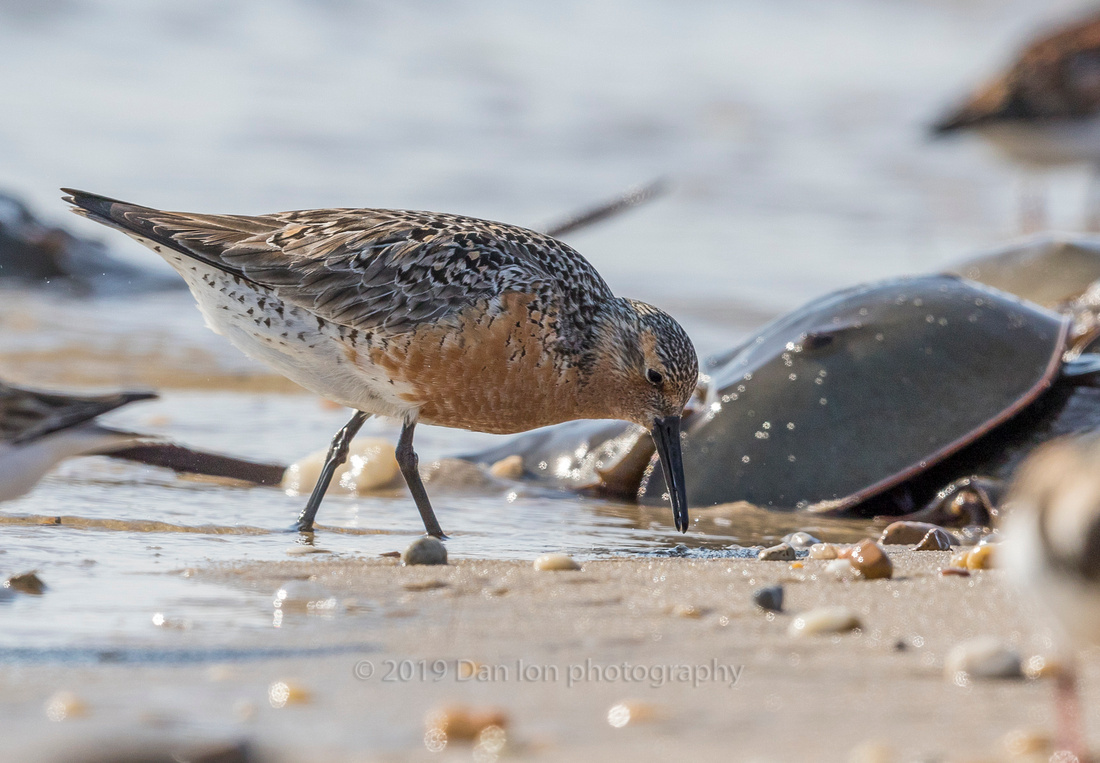 I have always enjoyed being close to water. No wonder then that shorebirds are some of my favorite. Sandpipers are at the top of the list. Weather by the ocean shore, a lake or pond or a nearby marsh I take great pleasure in watching and photographing the sandpipers calling these places home for part of the year. I didn’t get to see too many Red Knots all these years so when I read about the thousands and thousands of Red Knots that will stop for a brief period of time on the shores of Delaware Bay, so I planned a five day trip there to see them. The peak migration of the birds is hard to predict. Some years it happens in early May, other years towards the end of the month. I did some research on eBird, looked at figures for past years and decided to go towards the end of May. 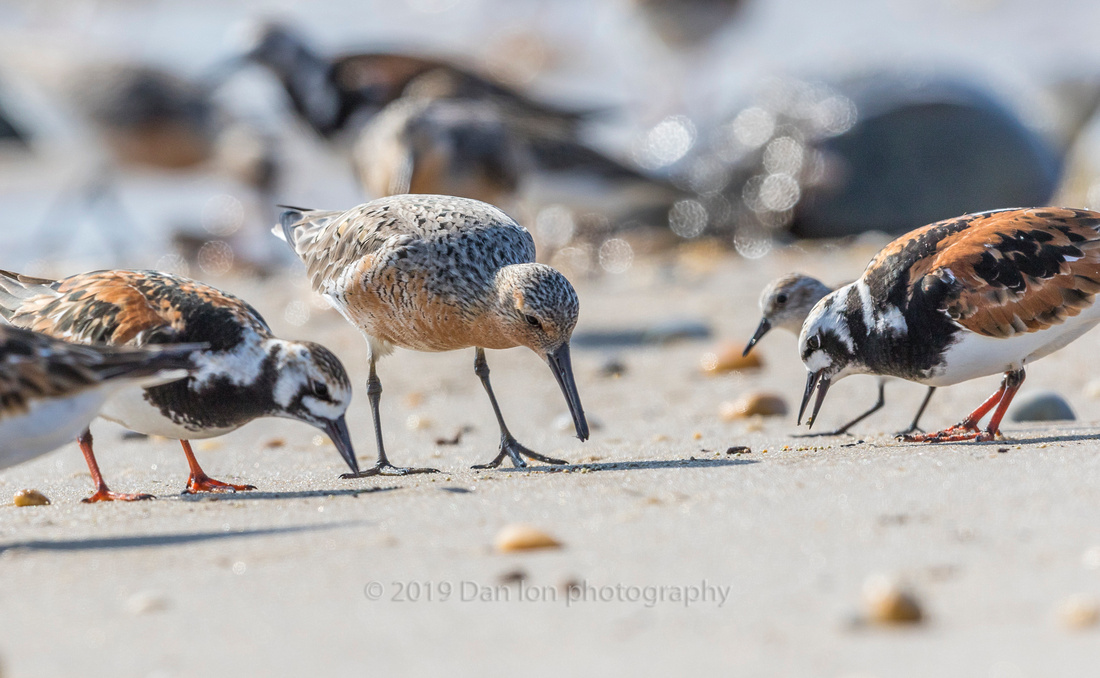 Horseshoe crab eggs for all

Some folks spotted a few hundred, while others counted a thousand or more. Sightings were on both sides of the Delaware bay. So I made my choice to go to the Delaware side. It’s a bit of a gamble so I hoped luck was on my side. As it turned out, I caught the end of the migration and I think a larger number were spotted on the New Jersey side. The Red Knots were in smaller numbers, maybe a few hundred to a thousand or two. But I got to see them very close while feeding on the millions of Horseshoe crab eggs littering the beach. They liked to be in the company of the Ruddy Turnstones and not the Semipalmated Sandpipers. The Semis were there by many thousands. The Turnstones numbered in the thousands with the Red Knots coming in last. 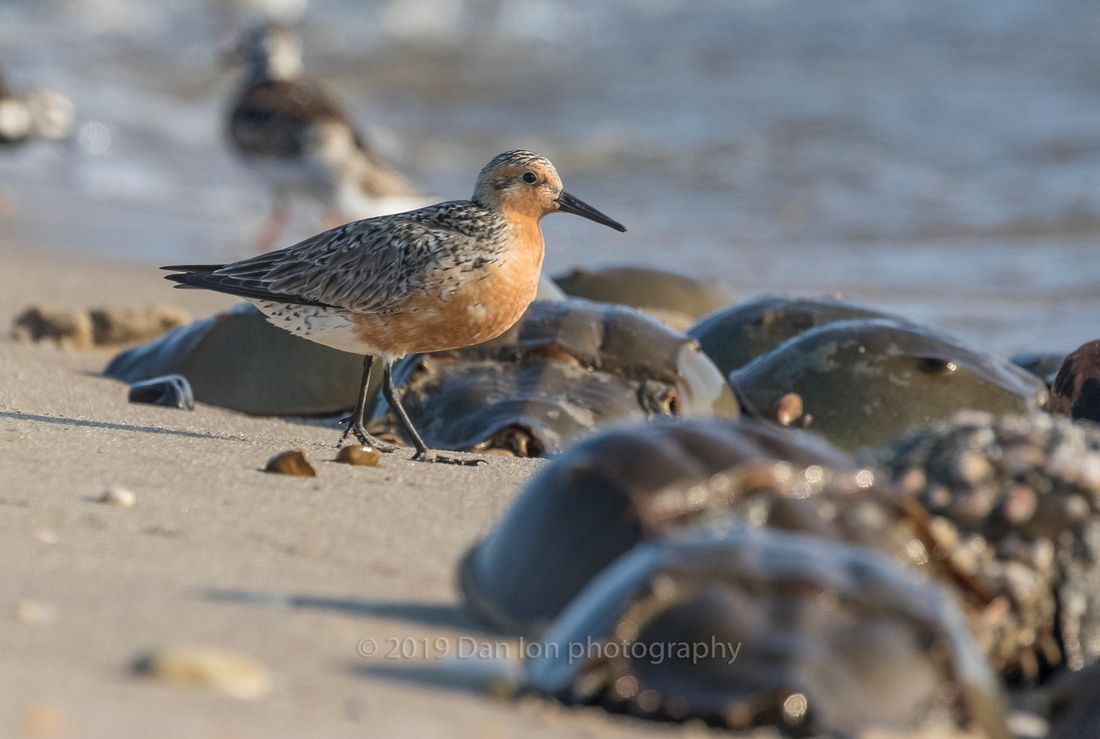 Seeing the Red Knots rufa was not disappointing. Most of them were in the early stage of breeding plumage with a beautiful rusty-red chest. Unfortunately the Red Knot rufa has been declining in numbers at an alarming rate. The population has dropped by 70% since 2000. In 2014 it was listed as a federally threatened species under the U.S. Endangered Species Act, the second most critical status that can be awarded to a subspecies. Human disturbances, such as development of land along the shore, increased number of tourists and locals on beaches (preventing the Red Knot from properly feeding and regaining its strength to continue its long flight), commercial development along the shore, are major concerns to its survival. 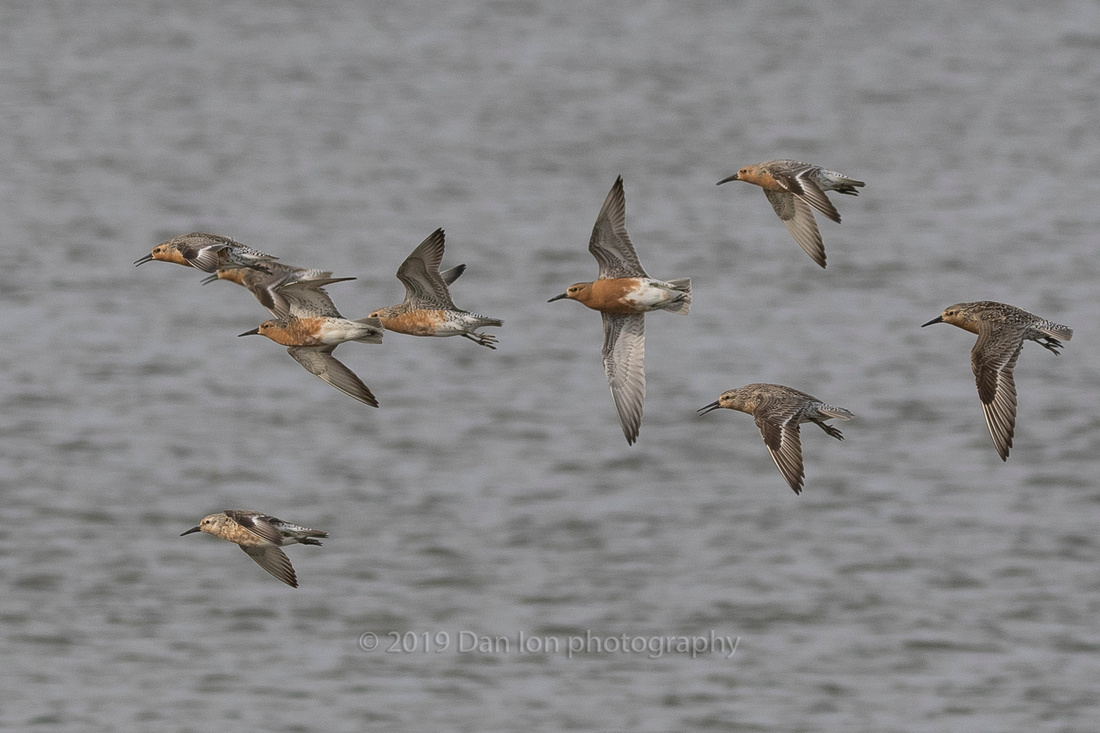 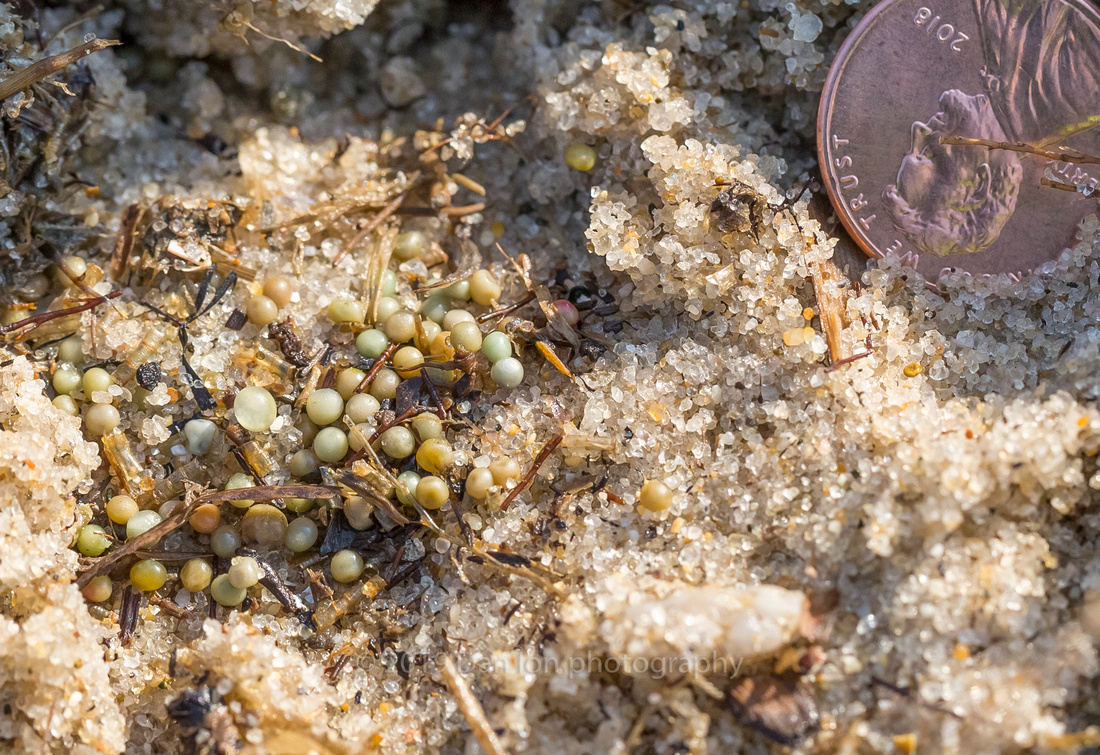 The Red Knot rufa is not at the top of the list of long distance migrations but is well known for being a long-distance flier on a perilous journey. Those that make the longest journey start at the bottom of South America, Tierra del Fuego. The first leg is about 4,200 miles with the first stop in Brazil. All along the coast of South America oil spills from the petrochemical industry pose a great threat to the Red Knots. The next leg is about 3,500 miles to the Delaware Bay. Dwindling number of Horseshoe crabs and human disturbance can keep the Red Knot from effectively feeding and preparing for its long journey. A final flight of about 2,000 mile will take it to the breeding grounds of the Arctic. The eggs and chicks are a food source for some predators there further threatening its survival. 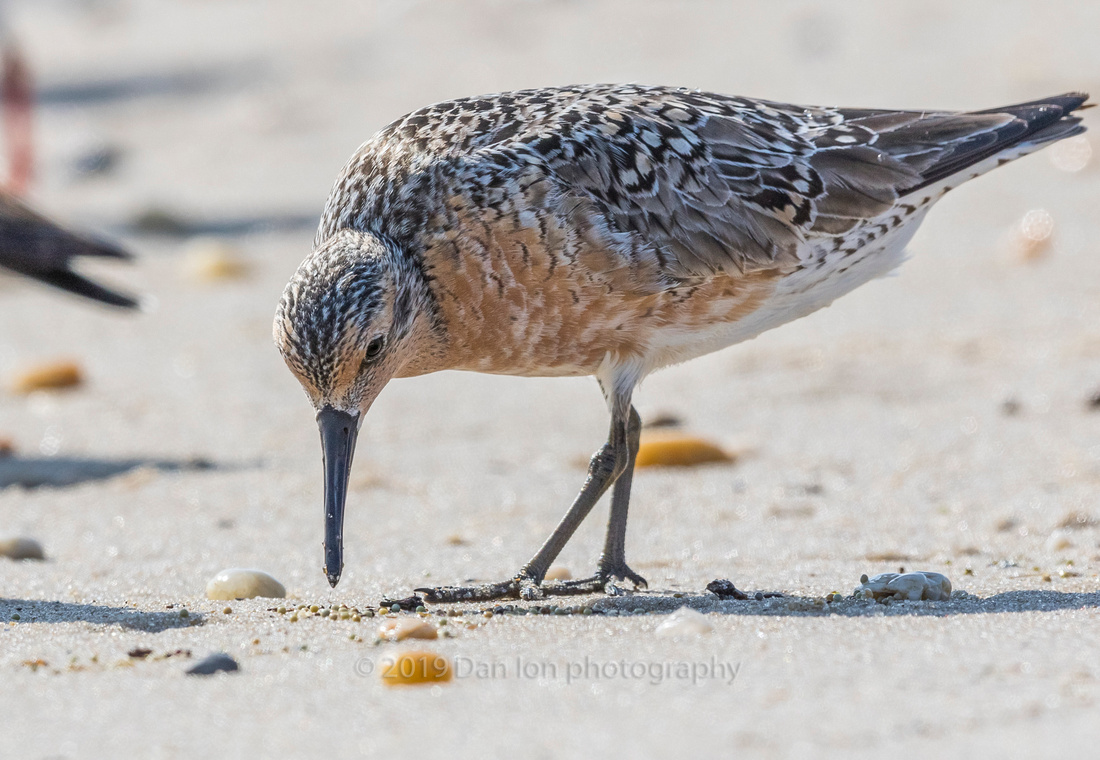 The female will lay a clutch or 3-4 eggs in early June. The incubation takes about 22 days. The young chicks are independent from the first day. Shortly thereafter they are abandoned by the mother and only have the father for protection. They feed on their own, mostly insects.  About 21 days from hatching the chicks fledge and no longer need the watchful eye of their father. The fall migration to Tierra del Fuego is a bit different than the spring one. Only the adult Red Knots will make the trip to Tierra del Fuego. The juveniles will spend the first year along the coast of North and South America and join the adults on the flight south the following year. The adult females leave south shortly after the eggs hatched. The males will follow them about three weeks later. Some males will stay another week or two to help the juveniles on their way south. The fly path in the fall is not as well defined as the the spring migration. They will stop in Mingan Archipelago in Canada, Bay of Fundy, Florida, the Caribbean and the coast of French Guiana and Brazil, feeding mostly on tiny mussels, clams and marine worms before they get to Tierra del Fuego. 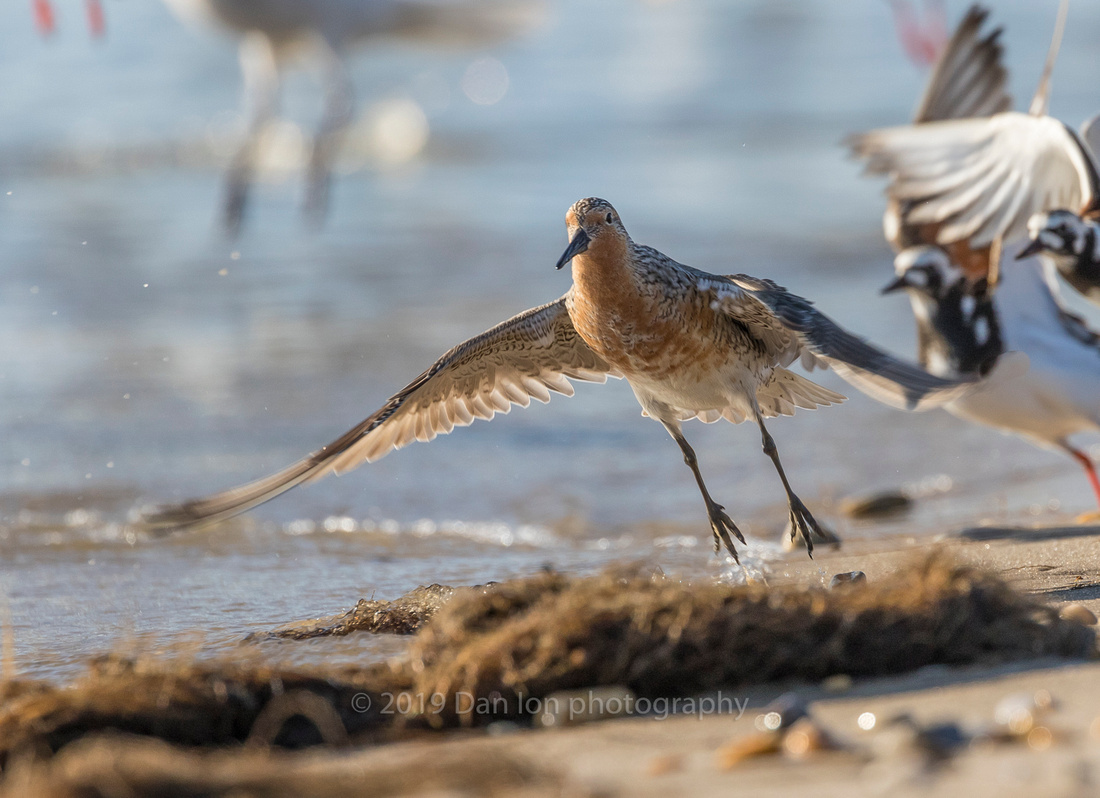 Seeing the Red Knots was great even though the numbers were not overwhelming. The other shorebirds will make your day also. The thousands of Semipalmated Sandpipers, huge numbers of Ruddy Turnstones, thousands of Laughing Gulls, a lot of Dunlin, a few Plovers, Willets and who knows who else will want to be there to have a feast on Horseshoe crab eggs and fatten up. And on top of that there are the Horseshoe crabs. By the thousands. I never experienced seeing them in such numbers, crawling all over the beach, hanging on to the female while other males fight for a chance to fertilize her eggs. I need to go back next year not just for the shorebirds for equally for the Horseshoe crabs. They are fascinating.

Link for the full image gallery from my visit here