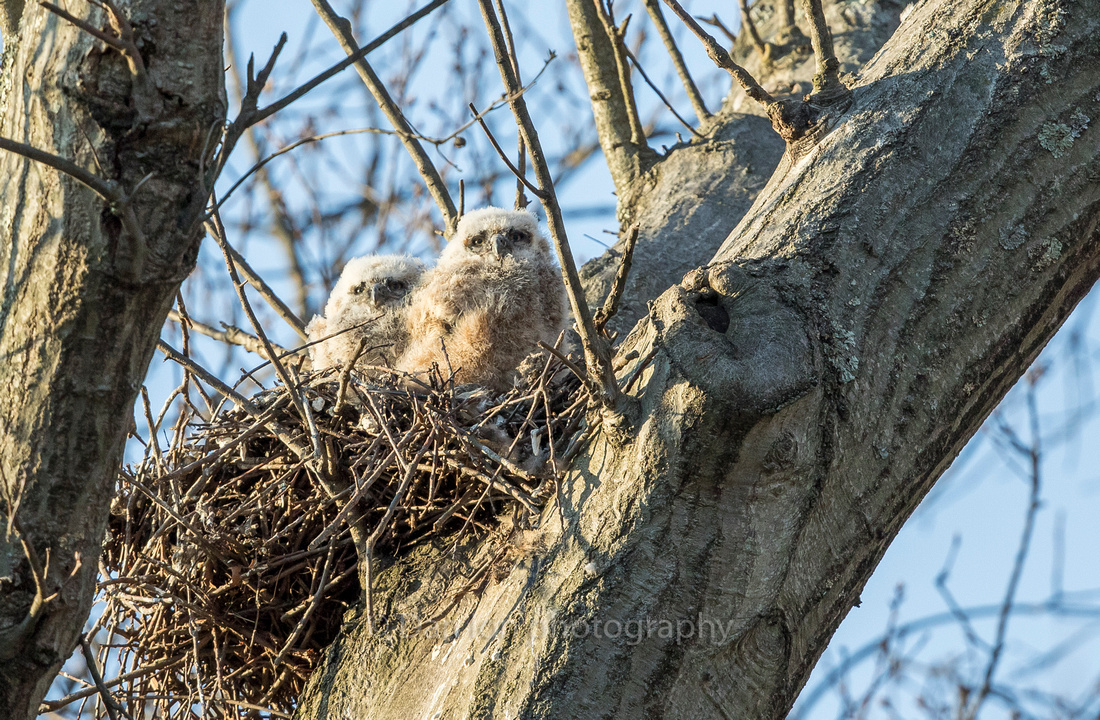 Getting bigger by the day. Early April

I am not sure of the exact day the first egg hatched but I am pretty sure the second one was not more than a day or two behind. These two owlets spent the early days close together in a very small nest. They were always in touch of one another except on a day or two in March when the temperature reached 80+ and they were overheating with all that down fur on them. I got to see them and their parents (mostly the mother) almost every day for a few hours for about five months. A lot of things happened to this owl family as I wrote in other posts. T 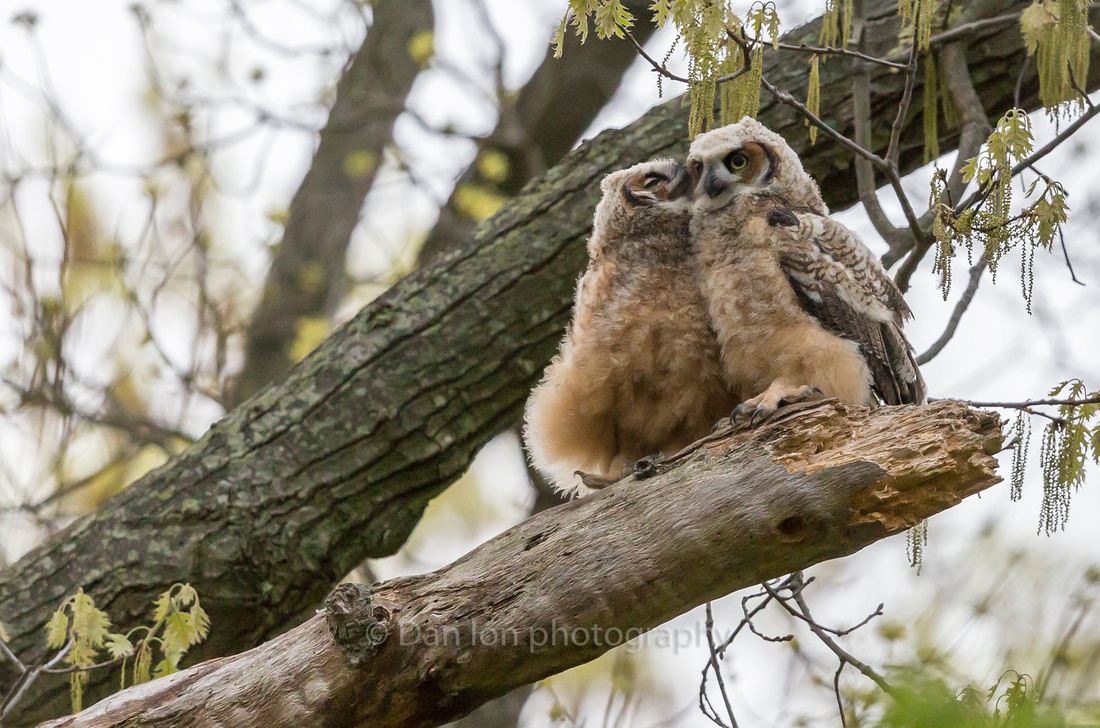 Always time for a kiss

hroughout their young lives I was amazed at the loving feelings and emotions they showed for one another. And for the mother and mother for them. I’ve seen those emotions in dogs and cats, in deer and in other wildlife. I’ve seen many birds, mostly in my backyard, taking care and protecting offspring. But I have never seen the level of love this owl family expressed. To me what distinguishes them from the rest is the eyes and facial expression. And what eyes do they have!

The owlets showed this emotion from an early age. Even when only a month old I could see how affectionate they were with one another. Feeding time was not fighting time. 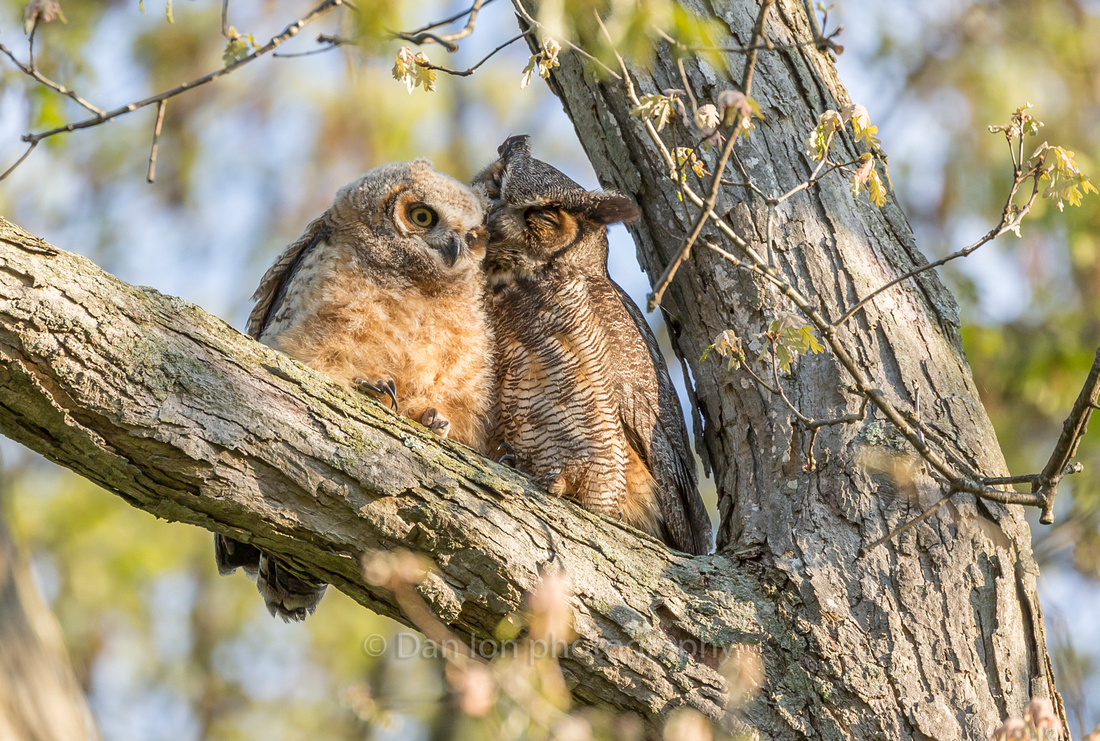 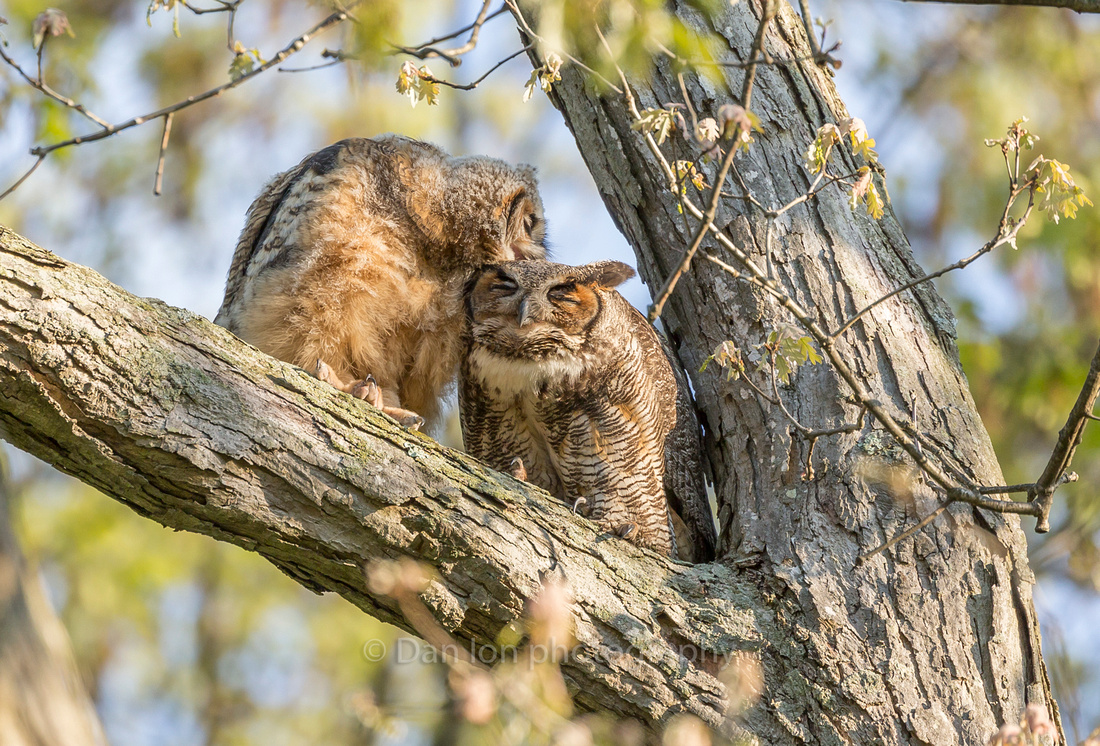 There’s nothing like a mother’s love and care. The love in her eyes as she looked over her babies was unmistakable. Occasionally the father would roost near the nest but I have never seen him feeding or spending time in the nest. 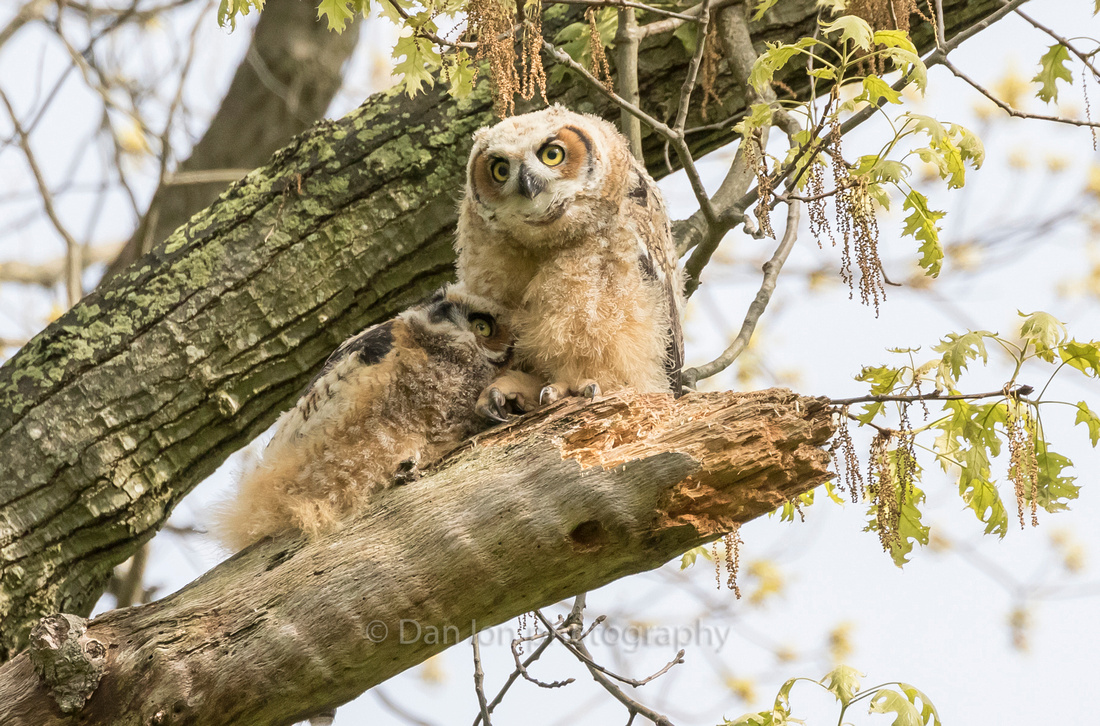 You're so nice to me! 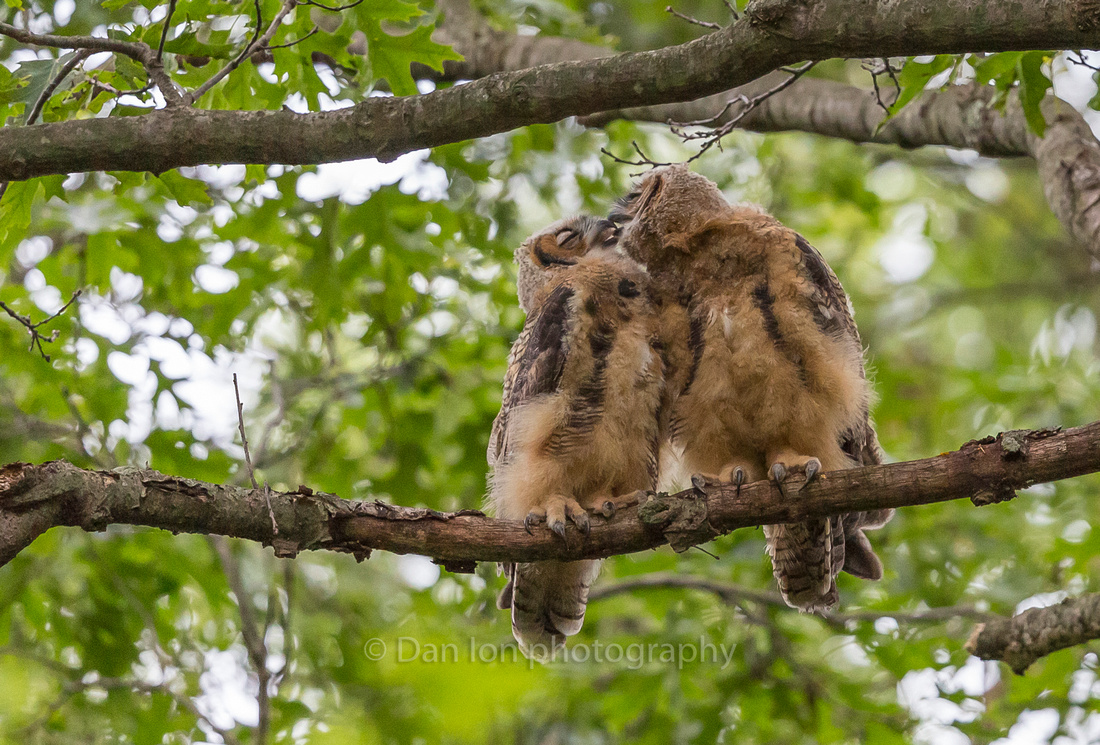 As they got older I think their love and affection only grew. In the man-made nest they were easily see them. So many times they just liked to be tight together. Looking into each other’s eyes. Kissing, touching beaks, preening one another. When branching came I could see the first one encourage his brother to join him on the branch.

After they fledged they got separated for a short while. Then they found each other agin. Roosting during the day in close proximity. As dusk approached they would roost together. Most times touching one another. Finding comfort in touch. These feelings stayed with them even when they were bigger boys. 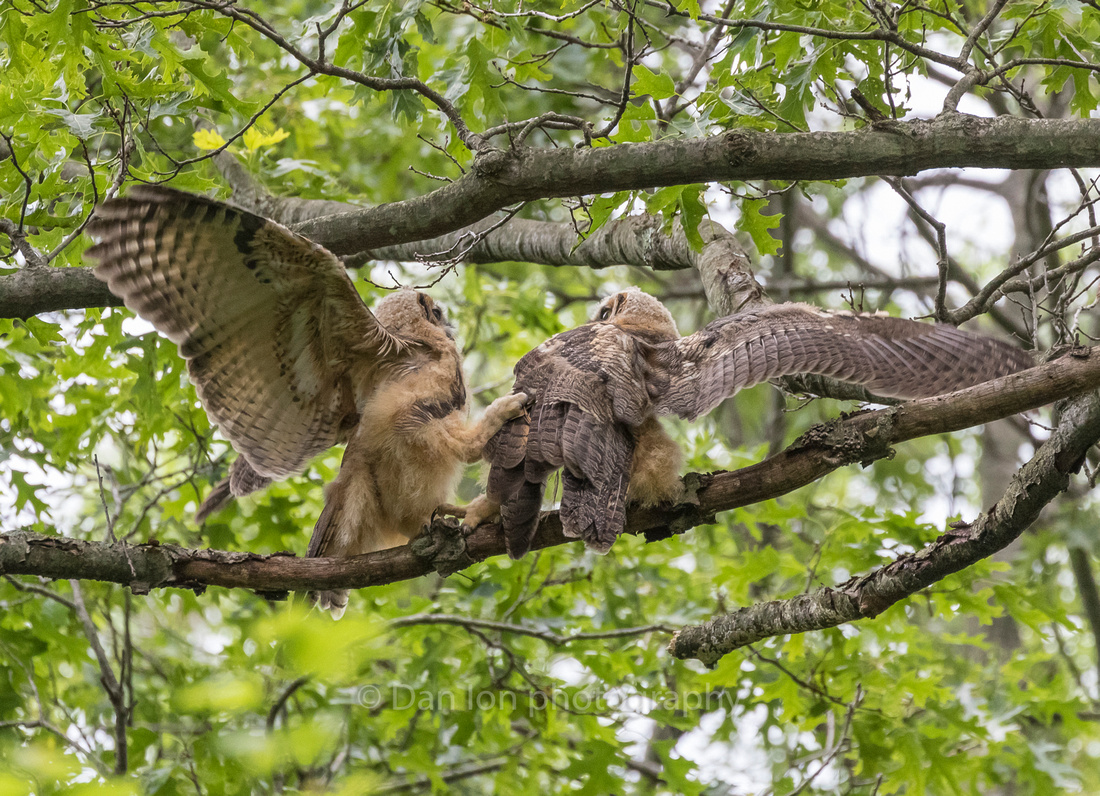 Not a fight. Just friendly grabbing and touching. 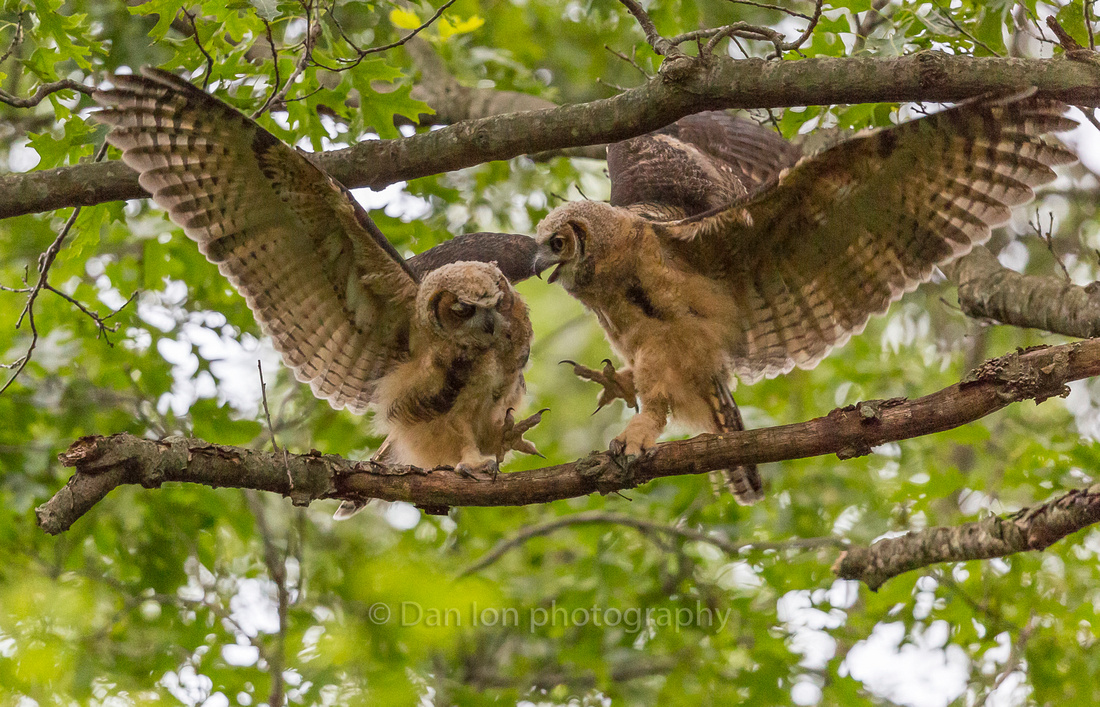 Not a fight. Just friendly grabbing and touching.

Sometimes they got together on the same branch and, to the passing observer, it looked as if they were fighting. Wings speed and flapping, claws out, jostling for position. Not so. It was just loving play. After the ‘fight’ I saw them settle down next to one another, kiss and shake hands. Claws that is. 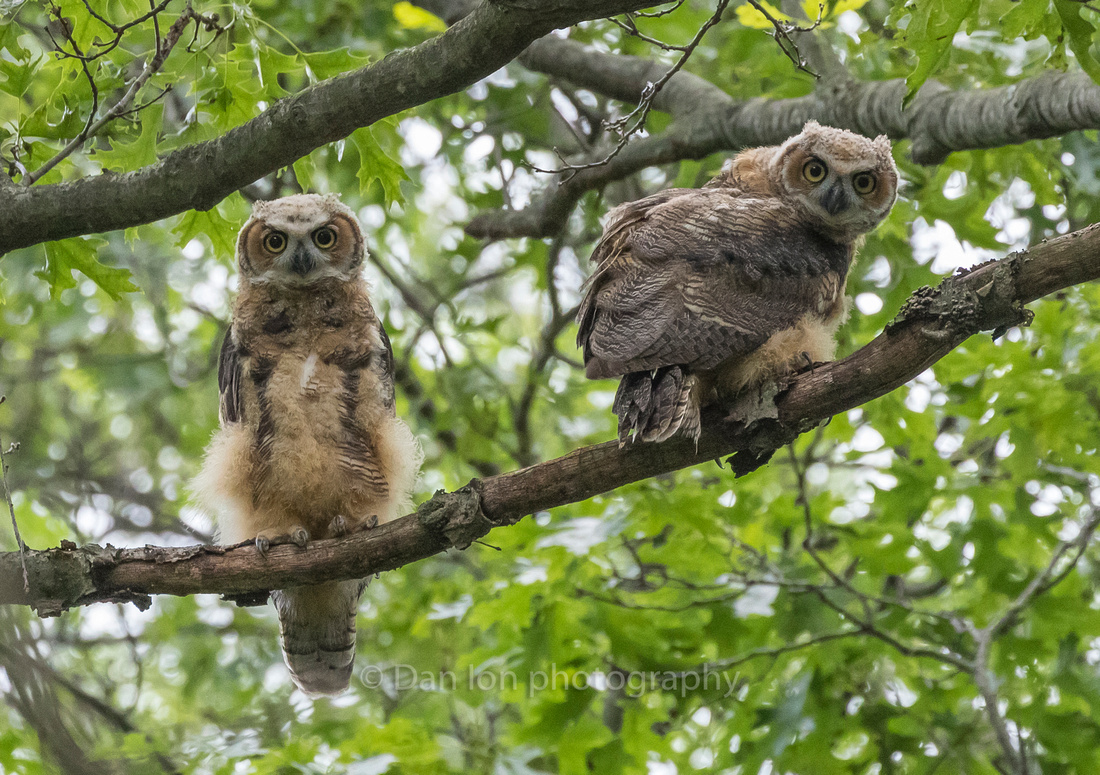 June 6. A clear change in the feathers

They stayed together till almost the last time I saw them, about six months since birth. By August they were not to be found. They either went to other parts of the park or they might have left to find their own home miles away.

While they were extremely close in these few months, I doubt that they stayed together afterward. They are not communal birds and even as paired adults they are not really that close. I hope they find love in a mate. Being males, and later as fathers, they might become distant and cold with the kids. I hope they don’t forget one another and the loving time they shared together as they became young adults.