The Barn Owl and the Vole ... in the pellet!

I have walked a trail that borders the nest of a Barn Owl many times but never noticed anything unusual. This time as I looked to my right in the lower bushes a few feet away from the trail I noticed a lot of white spots or blotches on leaves and the on ground. 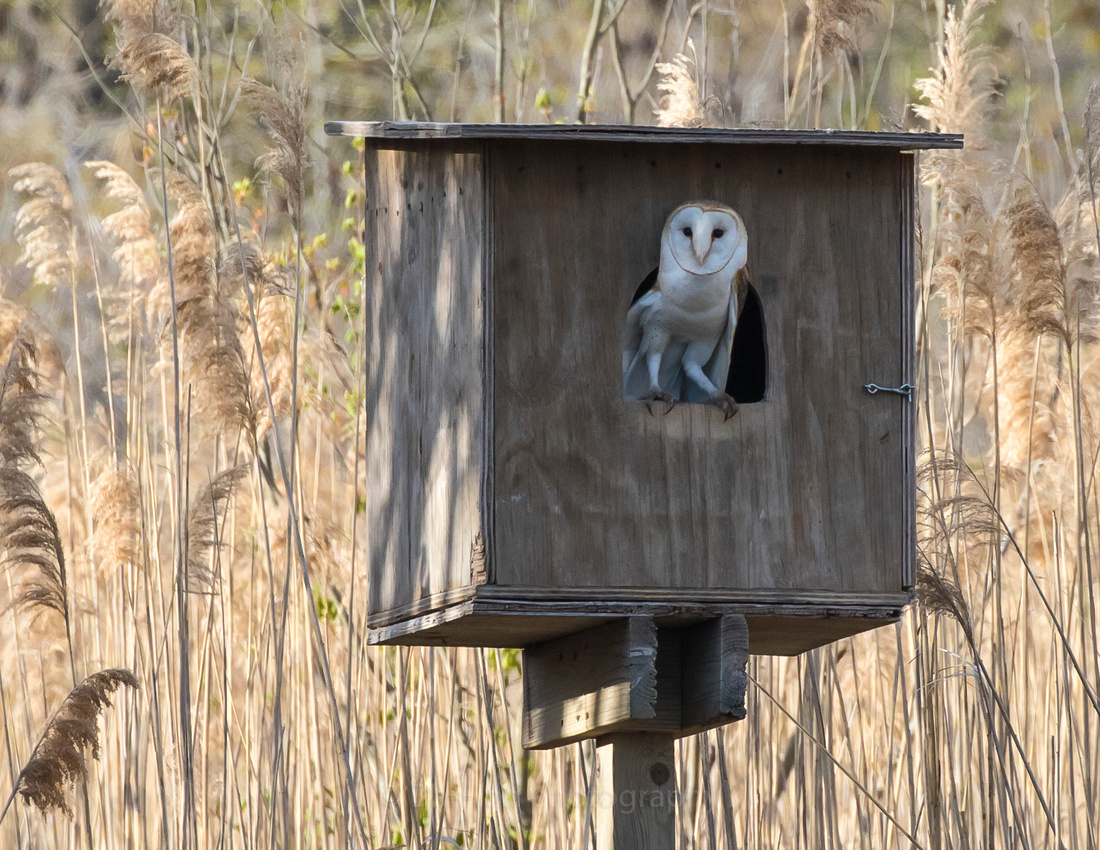 I stopped for a moment and thought about what I was seeing. It must be poop droppings from some bird. So I stepped over to get a closer look. Sure enough, a lot of white poop all over the place. And to my surprise a good number of grayish patato-like things on the ground. “Ah! They must be pellets from the Barn Owl.” 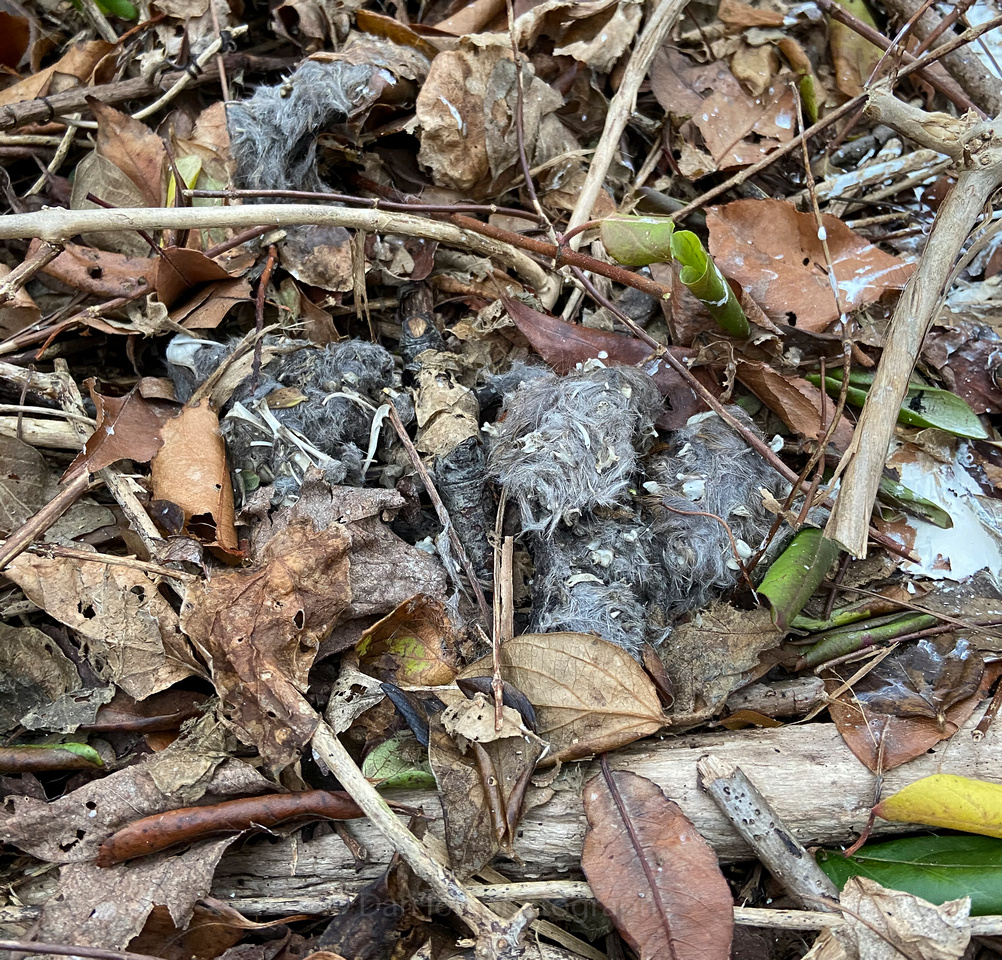 So many pellets about 300 feet from the nest

They looked fairly fresh. I thought it would be nice to take a couple home, examine and dissect them. Since I was not prepared for this I left and came back the next day, this time prepared with gloves and a plastic zip-lock bag. I picked up three pellets and went home quite excited. Regurgitated pellets are just that. Undigested parts of food, mostly bones and hair, the owl had in the past day or so that accumulate in their stomach. It is not fecal matter. Nevertheless I was very cautious on how to go about handling the pellets. Gloves on all the time and goggles. There might be some bacteria in the pellets so I had to make sure it was all dead so it would be ok to handle the pellets without gloves. 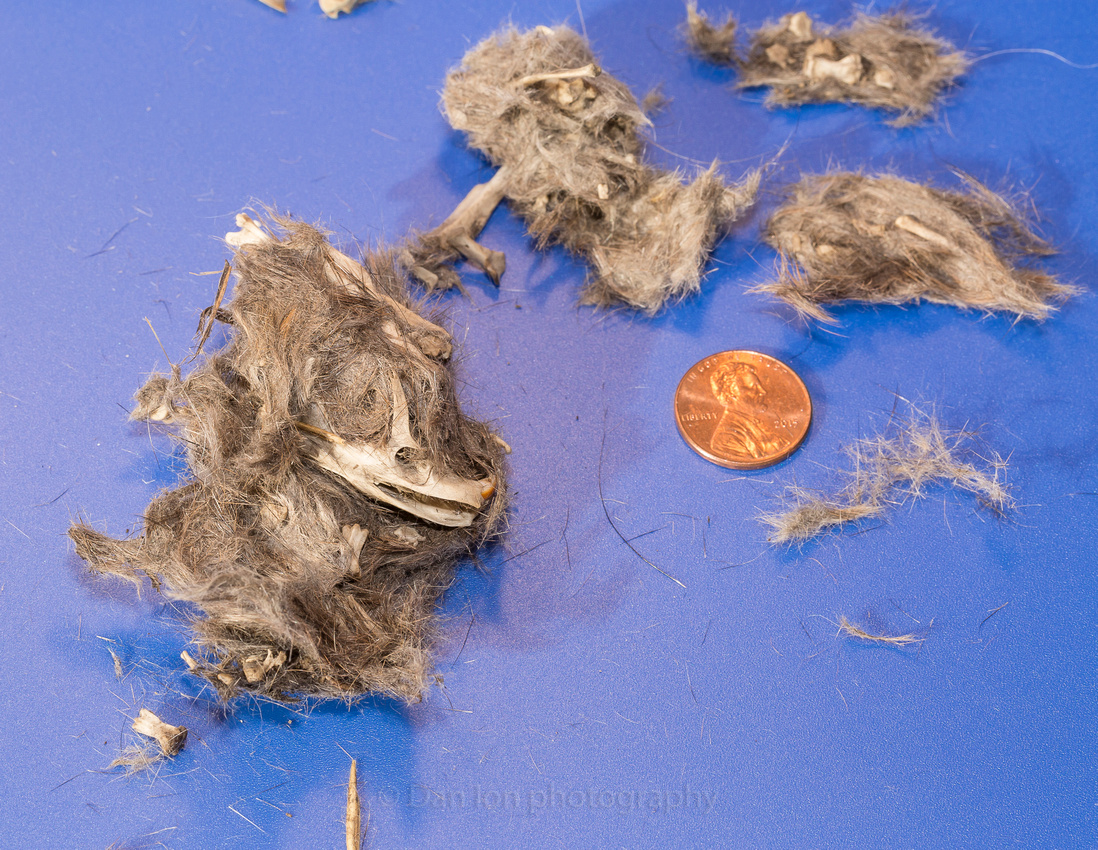 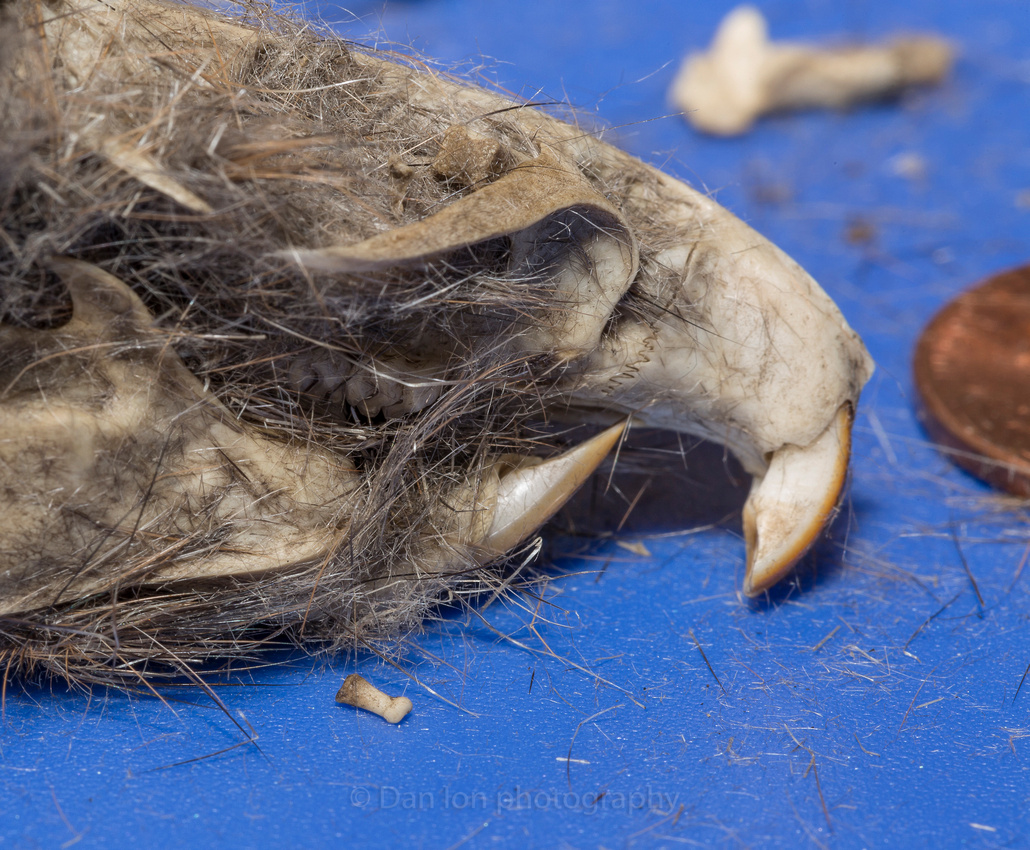 So I had to sterilize them. That meant ‘baking’ them. Well, almost. To completely destroy any live matter, I wrapped them in aluminum foil and put them in an aluminum dish in an oven. I had a portable electric one. I would not do this in my main oven in the kitchen. I set the temperature to 350 degrees, and the timer to 30 minutes. As time went on, I started to smell something. The smell of burning hair. This smell brought back memories from my early childhood. One of our neighbors would slaughter a pig every year. Part of the process was running a flame all over the pig’s skin in order to burn off the hair. It was that kind of smell. It stayed in the garage for a few days. I think I overdid the ‘cooking’ a bit. Either too hot or too much time in the oven. Nothing really burned though.

I let the pellets cool off for a few hours and then started the dissection. There was so, so much undigested hair. Gently using two tweezers I started taking the pellet apart. Pieces came off in clumps containing bones. Some with large bones like the skull, others with very small ones, like the disks between the vertebrae, or the very tip of the paws. Any bone that had a cavity or recessed part was full of hair. This became the biggest challenge, removing the hair from the bones. Great care had to be taken as to not break or destroy the bones. Some, like the ribs, were very delicate. It started to look to me that I had a fairly complete skeleton of a Meadow Vole, about 80% complete. I think I had bones from every part of the body. From all that ‘cooking’, the bones were not that clean looking, more like the color of dark and dirty ivory. The next step was to clean the bones. That involved soaking the bones in a solution of Hydrogen peroxide and water for at least 24 hours. I had to repeat this one more time to get good results. They come out very nice with a beautiful color of light ivory. Now I could sort out the bones by part of the body and start to reconstruct the skeleton. It was all very interesting. 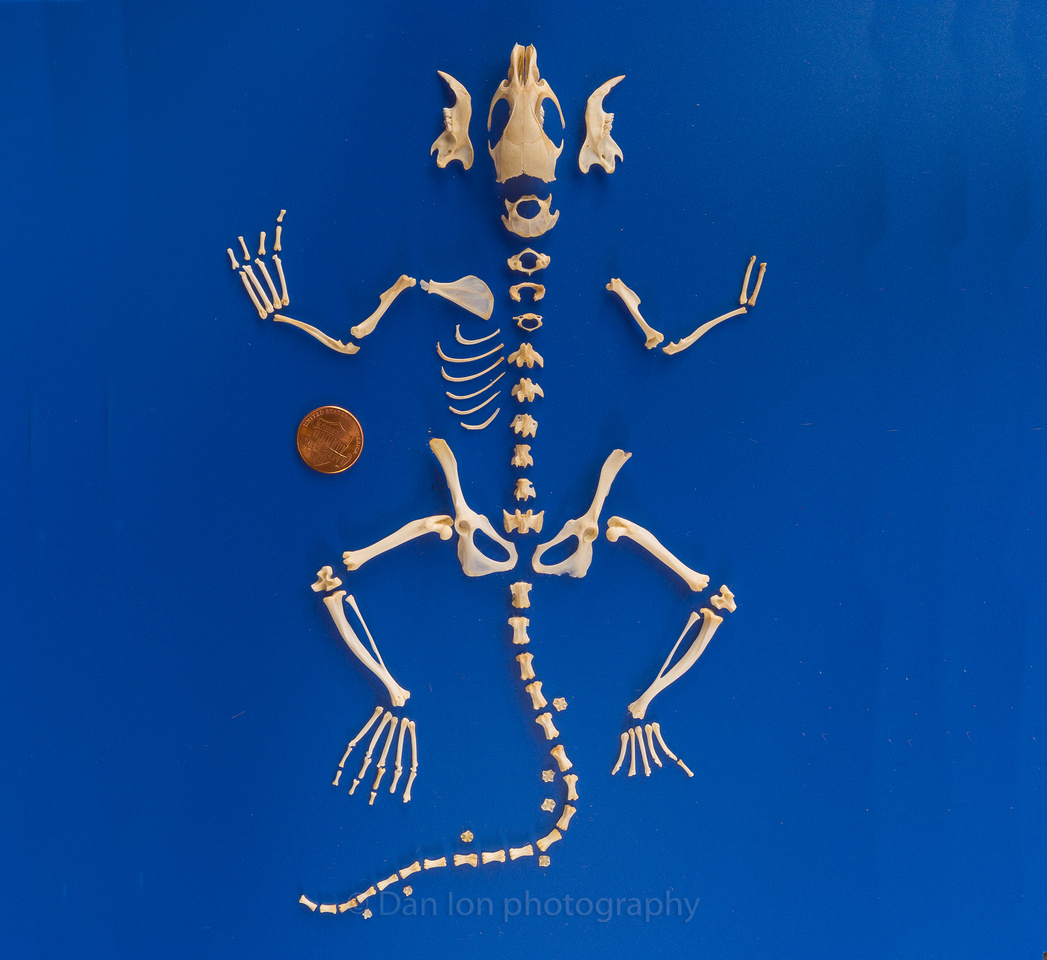 The skull was the most captivating part. Especially those four incisors. As I was handling the skull, one of them came right out. I found that I could easily pull out all of the incisors and put them back in with no trouble. They were huge and pretty sharp. I did the same with some of the molars. 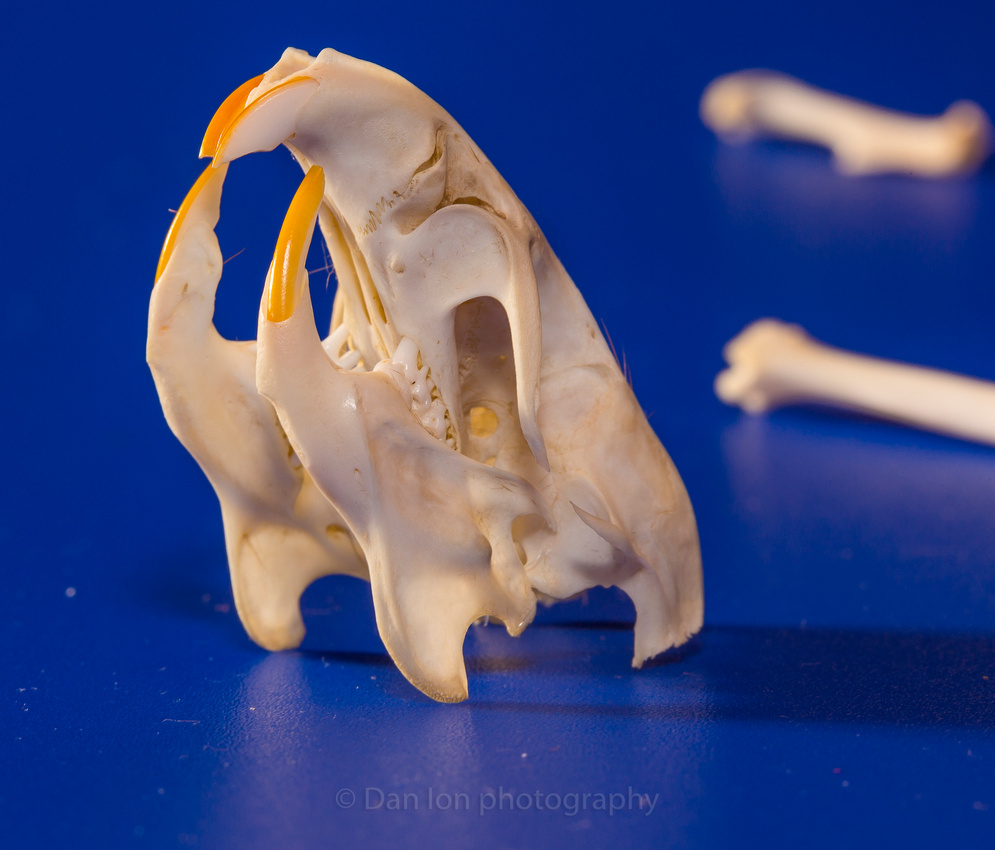 The incisors are in a continuous state of growth. Voles eat many different kinds of food. In the spring and summer they consume mostly living plants. In the fall and winter it’s seeds, bark and roots. Since they do not hibernate and do not store food, they have to actively forage for food every day of the year. A good thing for the Barn Owl. As it turns out, the front and side surface of the incisors are covered with enamel, while the back part is exposed dentin. Dentin is the yellowish tissue that makes up the bulk of all teeth. It is harder than bone but softer than enamel and consists mainly of apatite crystals of calcium and phosphate.

As the Vole gnaws, the softer dentin wears away leaving the enamel edge sharp like the edge of a chisel. Just like so many other rodents, the vole has to constantly gnaw to keep the growth of the incisors in check. Rodents don’t have canines like many other mammals, and have a large gap between the incisors and the molars.

The other pellets were not as rewarding. Skeletons were mostly incomplete. I also realized that the bones belonged to a vole much smaller in size, an immature victim. I thoroughly enjoyed this whole thing from start to finish. Most of us don’t get a chance to do this kind of activity every day, or want to. It certainly was very unusual for me and I must say I found it very interesting, rewarding and educational. Hmm, what else could I dissect and reconstruct? No worries! I’m not picking up any road kill!

More images from this dissection in the gallery here