Time to say good bye to the Snow … Geese! 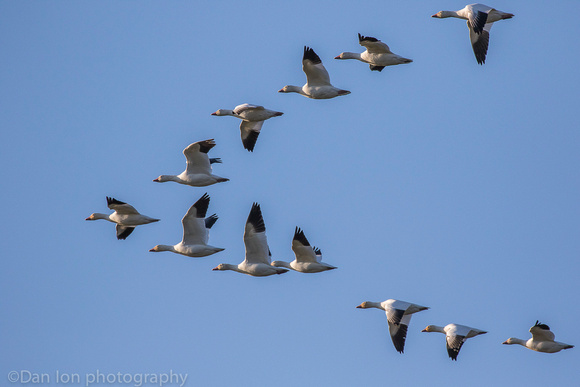 March is here and the winter stay for the Snow Geese is coming to an end. Their 3,000 plus mile journey back to the breeding grounds in the Arctic and sub-Arctic regions will soon begin. Part of the Anatidae family which also includes the swans, which are mostly larger than geese, and ducks, which are smaller and have short necks. Not the most colorful in goose family but nevertheless interesting to me. Their plumage, mostly white except for the black-tipped wings, is plain but attractive. What I find most interesting is their gregarious behavior, their vast numbers as they fly from place to place, their vocalizing and their feeding habits.

I have seen flocks numbering in the thousands taking flight at sunrise and covering the rising sun and sky with their sheer number. And the noise they make as they fly overhead is deafening. The show repeats itself in the evening as the Snow Geese return to the night resting grounds. 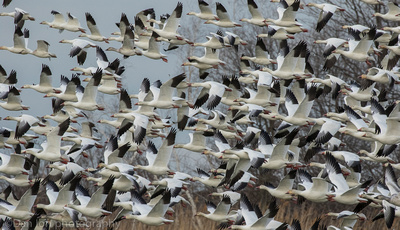 I’ve had the opportunity to observe a few large flocks, numbering in the many hundreds, in my local waters around the Jamaica Bay Wildlife Refuge, New York, in the last few years. They show up around the end of October, beginning of November. I could guess their coming a minute or so before spotting them. The sound of barking hounds is unmistakable. Listen. And then, suddenly the sky fills up with hundreds and hundreds of tiny snow flakes drifting slowly across the sky. If their number is in the thousands it looks more like a snow storm is about to hit. The snow flakes get bigger and bigger and before you know it they are all floating on the pond or bay I was looking at. The noise subsides a bit but never stops. Then a few minutes later all of a sudden one of them gives a signal and the whole flock takes to the air and the barking gets very loud again. Rising snow. Off to the feeding grounds.

Snow Geese digging for roots on the bay at low tide.

The Snow Geese, herbivores, are voracious foragers. They have to be, food passes though their digestive system in only a couple of hours! Feeding for most of the day in concentrated areas of coastal saltwater marshes and bays, wet grasslands and freshwater marshes. They feed in water-logged soil or shallow water. Diet consists entirely of plant material, and their primary foraging strategy involves grubbing for underground rhizomes, tubers, and roots. They are capable of eating the entire plant and not just the roots. They

Snow Geese in a very rare fight over feeding rights.

are peaceful eaters and rarely have I seen any ‘arguments’ while feeding. They are also fairly tolerant of my presence. Most of the time I am in a hide but occasionally out in the open within one hundred feet or so to the nearest one. Not so tolerant though when on the water.

Snow Geese digging for roots on the bay at low tide. That is one big root.

Their very strong bill come in very handy when digging deep in the mud in search for roots. Not uncommon to see them dig down more than 4-5 inches deep. And of course when one comes up from all that dirt and mud, the head

Snow Goose coming in the pond for a drink and a bath as the sun sets.

and neck are not white anymore. They clearly show the menu on their face and chest. While feeding in shallow water the mess is not so bad. Feeding for a few hours on the bay side at low tide, then taking a quick flight to the fresh water pond for a drink of water and then back to the feeding grounds. As the day comes to an end, one last trip to the pond for a drink and a thorough cleaning and preening before settling in for the night. Feeding Snow Geese in a tidal salt marsh

They are Snow Geese again. Until the feeding starts all over again the next day.

As for their loud barking, squawking and honking no real studies have been done to determine the meanings, if any. They must be talking to one another. Alerts to danger of predators, to take-off time, to spotting a good food source. Or they might be just singing a good song or telling a good story. I have captured images of them in flight looking at one another and clearly having a conversation. It’s a long 3,000 mile journey to and from breeding grounds. They are a very chatty

Snow geese flying and those two are definitely having a talk, Jamaica Bay NY

A lot more images of the Snow Geese in action here.