BIF photography ... and the B is for Bees 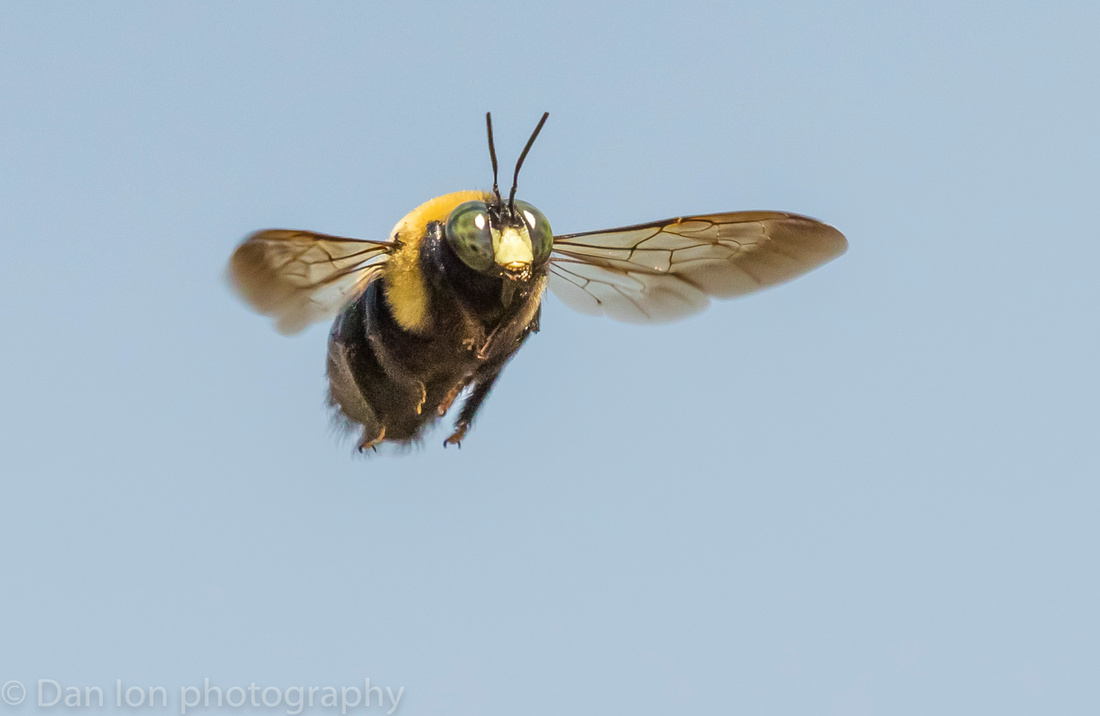 For nature and wildlife photographers capturing birds in flight, BIF, is one of the toughest challenges and most rewarding when good images are captured. That’s because most birds are very fast and many have unpredictable flying paths. Peregrine falcons are the top speedsters of the air with some duck species, Red-Breasted mergansers, not far behind.  And then you have the smaller varieties such as warblers, finches and humming birds that are not super fast but have a very erratical flying style.

But there is another BIF that is even tougher to handle. Bees In Flight. Or small insects. They also fly around very fast but what makes photographing them in flight almost impossible is the extremely unpredictable flight path combined with the very very small size. Any insect smaller than a bee is going to be almost impossible to capture in flight. I gave this BIF a try recently and with some luck and some planning I got a few acceptable images. 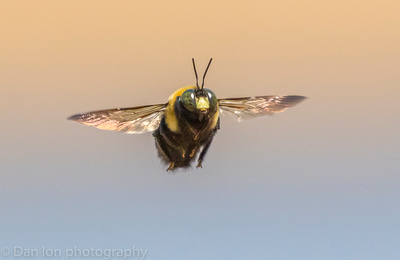 There’s a couple of things you can do to increase your success rate. The biggest issue is having the camera focus on the flying bee. Of course it’s set on AI servo, with Zone AF or 61-point automatic selection AF selected. If shooting against the sky the camera will focus on the bee with some success. It will still fail a lot because the bee is very very small and is flying erratically most of the time. Bees, as the Carpenter bee here, will hover in place for a second or two. That’s the moment when you go into action. If the background is vegetation, the autofocus will surely lock onto that and not the bee. There is a trick you can use to avoid that situation. Prefocus. As you hold the camera and hunt for the bee, manually focus the lens until the the bee is in focus. As the bee hovers or moves around, you are still focused at that distance. As the bee comes back into the view or as you move the camera looking for the bee, the lens is already prefocused. Then press the shutter release button half way and the autofocus will have a much easier time to lock onto the bee and stay locked as you follow it around. Same can apply when shooting against the sky. It takes a bit of practice but with a lot of patience good results can be achieved. As the bee stops hovering and flies away, you have a split second to follow it and get a good sharp in-flight shot. After that you’re done, and have to start all over again with the prefocusing method. 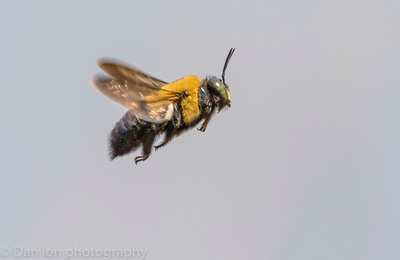 Another alternative is again to prefocus on an object nearby that you estimate to be the distance where the bee will be hovering. The other important setting is your shutter speed. Over 5000 of a second is what you want especially if you want to capture the beating wings. Humming birds are well known for those ‘invisible’ wings as they hover. They beat their wings at an average of 50 to 60 times per second. The Carpenter bee beats it’s wings at almost 250 beats per second. That’s per second, right? Depending on the position of the wings at the moment of the shutter release you may get them pretty clear and sharp. If that’s the image you’re looking for.

The other option is to get a bee, or insect, as it approaches a flower. Since you are not hunting for it but are just waiting for the bee to come to the flower you know your focusing distance. Go to manual focus, focus on the flower, select a decent depth of field setting and as the insect approaches shoot away in burst mode. You’re bound to get a few sharp images. Good luck!

Click on the image to see at full size.