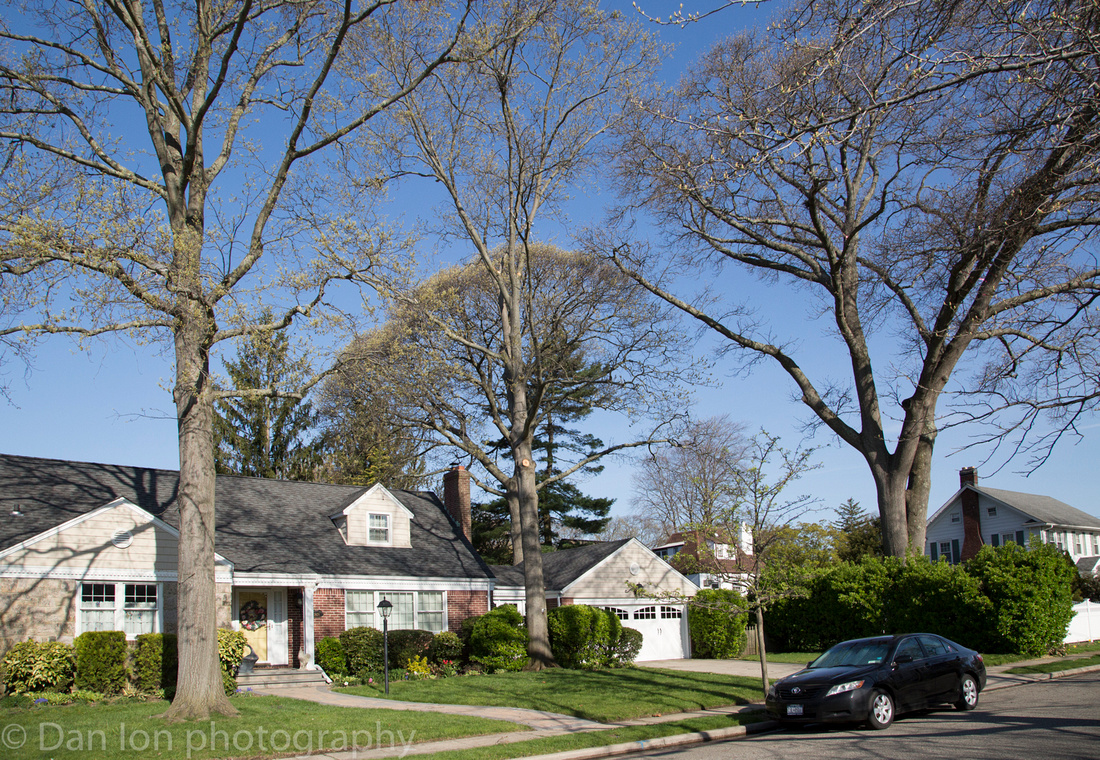 Yellow-crowned Night Herons nesting in the two trees at right.

For the most part people and wildlife in urban or suburban environments have learned to live with one another. Though I think that wildlife has had a lot more learning and adjusting to do since we are constantly increasing in numbers and are taking up more and more space with commercial, industrial and residential construction. Not to mention the effect our modern lifestyle has on the air, water and soil. We spend most of our life in controlled spaces while the wildlife has only one home, the ‘great’ outdoors. And wildlife has no means to adjust or alter the environment. They get what they get. 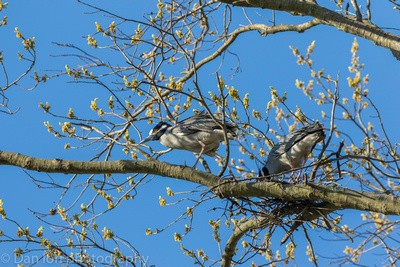 I live in suburban Nassau county in Long Island, NY. Quite streets with a diverse style of houses on mostly third of an acre lots built from the early 1900s on. Manicured lawns, children playing out front or in the backyard, neighbors having breakfast on the front porch. If you like the suburban life, it’s a town well liked and sought after. There’s a creek close by and a couple of fairly large lakes a short distance away in a state park. There’s plenty of wildlife around. Pretty much everything you can name in this part of the country except for deer, foxes, coyotes and bears. It’s only 20 miles east of New York City so the wildlife is not too wild. 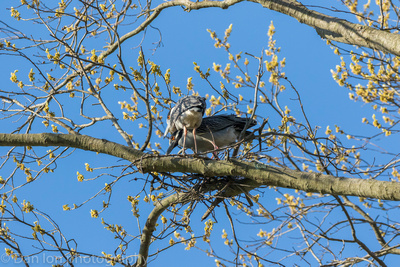 The birds are in abundance and the varieties change with the seasons and migrations. In the small pond that I have in the backyard I have seen some unusual species. Surprised to see a Tricolor Heron, Snowy Egret, Great Egret, Red-tailed Hawk and a Mallard pair. It’s a really really small pond. As I do my morning walk or bike ride along the nearby creek, in the spring I see a good number of herons, egrets, cormorants, terns and ospreys. I have seen Yellow-crowned Night Herons (YCNH) nest in the trees close to the creek in the past few years and watched the eggs hatch and the fledglings take to the air. 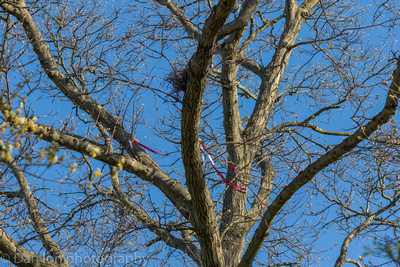 But a couple of weeks ago as I was doing my morning walk, I came across a serious suburban conflict between a homeowner and herons.

The house on this quite street has a good number of big trees in the front and back yard. This spring two of their trees have been taken over by nesting Yellow-crowned Night Herons. I counted five active nests and have seen at times more than 12 YCNHs in the trees as other herons are looking to find a nesting spot also. Yellow-crowned Night Herons are beautiful birds. Fairly big with very pretty plumage. So where is the conflict you may ask. The herons are ruining the everyday life of the people in that house. Poop! Yes, there’s poop everywhere. On the street, on the sidewalk, on their cars, on the house, on the patio table, in the 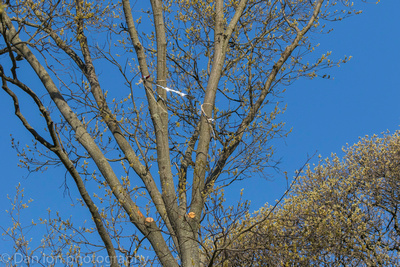 Trimmed tree and silver streamers on branches in the hope of deterring Yellow-crowned Night Herons from building a nest.

backyard. White blotches all over. Talked to the homeowner who understandably is very upset. They had to deal with one nest last year and they managed that situation. But five nests and additional herons hanging around is way too much to deal with. Their tranquil and enjoyable suburban life has been ruined by these nesting herons. In these trees the herons have very small and sparsely-built nest and spend a lot of time walking on tree branches or flying from one branch to another. The only time they stay in the nest is when sitting on eggs. The owners have taken some action. They called a tree-pruning company to go up in the trees and trim some of the branches. To be clear, not the ones that have a nest on them. Also they had silver streamers attached to branches in a lot of 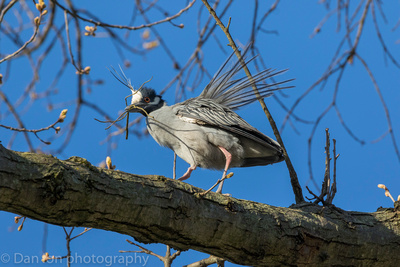 places in the hope that the herons will be deterred from finding a nesting place there. The streamers did not work at all. They called the wildlife conservation bureau in Nassau county and were told that the herons are endangered and that there’s nothing they can do about it. They are not endangered but are protected under the U.S. Migratory Bird Act. The homeowners have lived there for the past 20 years and never had such a serious problem. They are very very upset and don’t know what to do about this health hazard, the all around mess and smell.

Yellow-crowned Night Herons produce a single brood and usually lay three to five pale blue-green eggs. After hatching, the chicks grow quickly for five weeks and fledge in about their sixth to eighth week. Even after fledging, the juveniles often remain attached to the nest for a couple more weeks. The complete breeding season can end as late as July or early August, when the juveniles have grown and learned enough to survive on their own. 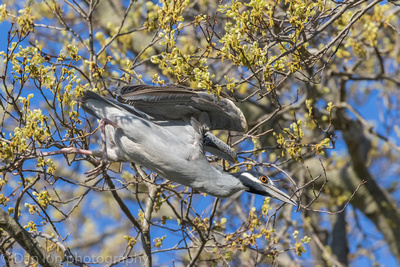 So if my math is right, the five pairs nesting there now could potentially grow to a population of 25 or more birds. Wow! That’s a hard number to digest. With that many nests in two trees this qualifies as a nesting colony. Cutting down the trees was a thought but the tree with most nests is not rooted on their property.

The YCNHs are not a threat to humans. They could bite (not really) and they will take flight if people come too close to their area. However there is a remote potential threat of disease transmission. YCNHs are an intermediate host and amplifier of the eastern equine encephalomyelitis (EEE) virus, or sleeping sickness. The birds first get the virus from mosquitoes. Then the YCNHs can transmitted it to a wider range of mosquito species that then in turn transmit the virus to horses and humans. 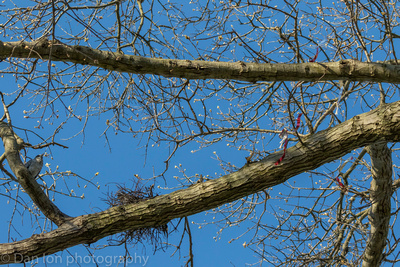 Eastern equine encephalitis is rare in humans, and only a few cases are reported in the United States each year.

The homeowners have spent a large sum of money to purchase their house. They are spending a lot more money on taxes, maintenance and gardening expenses, to support a lifestyle they like. The Yellow-crowned Night Herons have been around for thousands of years and have always found nesting places in trees close to water. They don’t know anything about property values and high taxes or suburban lifestyles. There’s no winner her. I feel for the homeowner and I also feel for the herons. Don’t know what I would do if this would happen to me. Setting up plastic tarps over the driveway and patio? Trimming 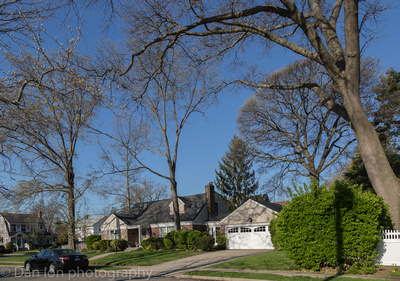 more branches off the trees? Hoping that crows discover the colony and start stealing the eggs or pick-off the young chicks when or if the parents leave the nest for a few seconds? Spend time daily washing off the poop? Most people could deal with one nest. But five? And possibly 25 or more herons constantly pooping on the house, cars and property for the summer?

I don’t know what’s going to happen from now till the end of summer but I don’t have a good feeling about this situation. I feel bad for both sides. Link to YCNH gallery here

Note: Click on the images to view at full size.