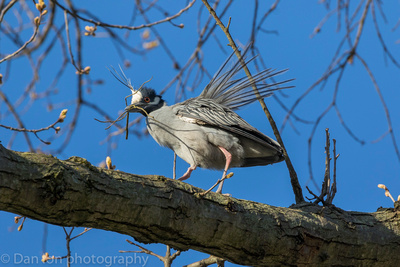 It's been more than a month since I observed and wrote about this conflict in suburban Long Island very close to where I live. Conflict between nesting Yellow-Crowned Night-Herons and the people who live right under the nesting colony. At that time the herons just about completed their nests and were about to lay eggs. I think five nests in the same tree or neighboring trees make it a colony. I've been watching all along as I did my morning walk almost every day and I have good news to report. Good news for the herons and not so good for the home owners as you might have already guessed. And also, sadly, very bad news about one unfortunate young heron. 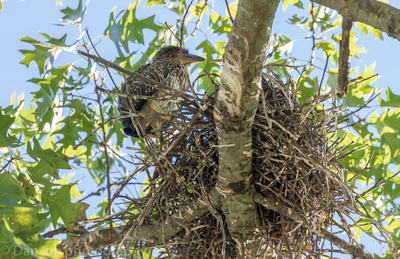 Young YCNH in nest. Poop is all over the nest and nearby branches.

The good news first. All five nests are still active and have done very well. From what I can see, one nest has five offsprings, another four and I am guessing the other three have three ore more youngsters. Hard to tell with the dense foliage now. And all youngsters are very close to fledging. They are testing their wings constantly. Either at the nest or as they move about on tree branches. And a few are taking very short flights between tree limbs. They have been growing very fast and are close in size to the adults. The nests are very crowded and some of them need to find nearby branches for a place 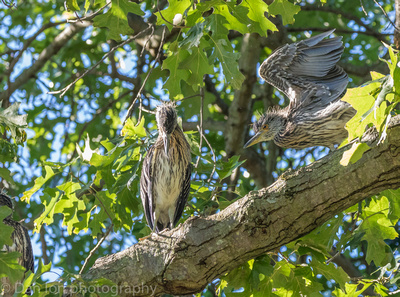 to rest. Also they are very hungry. With so many mouths to feed the parents are very busy. And all that food equals to a lot of poop. And they constantly do. The smell is pretty strong. Most birds that feed on fish make one nasty smelling poop. Also I have seen one chick throw up a pellet. Undigested parts from their diet. So most of the day they rest on tree branches, exercise their wings and wait for a meal. And when they see the parent coming in with food it's a mad dash to the nest. The parent regurgitates the pray right in the nest. And the youngsters dive in. The meal is gone in less than a minute. 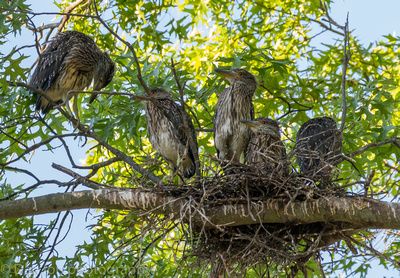 This nest had five young YCNHs, all very active and hungry.

The bad news for the home owner is that with about 30 birds in the trees the amount of poop is huge. Briefly saw them but I didn't hear any complaints. Maybe they got used to it, (really?), or maybe they've given up since there's not much to do about it. It will be there for another few weeks and then it's over. Don't even think to ask them what's going to happen next year. 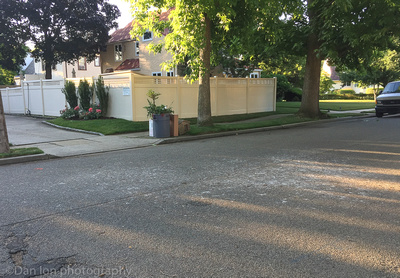 YCNH poop on street. And the smell is pretty strong.

Now, very bad news for one of the youngsters. While taking some photos of the almost fledging youngsters in the one nest with five of them, almost above me there was another nest with four youngsters. I heard a small commotion and spotted a parent flying in with a meal. Of course the chicks got excited and scrambled to get to the nest to get their share of food. As I was looking up at the action I saw one of the chicks rushing to the nest half walking half flying on a good size tree branch. As it did that, it lost its balance and fell to the pavement. I heard a solid thump as it hit the asphalt. Right in the middle of the street ten feet in front of me. It was a 40 foot drop. I quickly stepped over and saw that it was in shock and badly hurt. One leg was broken and probably also the wing that it fell on. I picked it up and took it by the curb and rested it on the grass. There wasn't much resistance to my handling it. 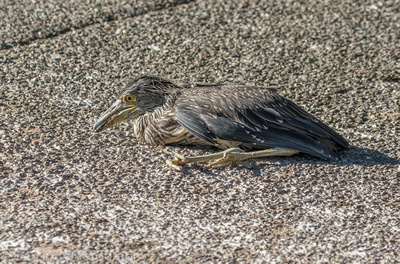 Young YCNH seconds after falling from tree. It was a 40 food drop. Dazed and in shock.

There was not much I could have done for this one. It had zero chances of surviving. I am sure in its short life it practiced flapping its wings and maybe even fly-hop to a nearby branch. But it was just too young and inexperienced to know what to do. All it had to do was spread its wings and glide to the ground. But it didn't know how or what to do. Five minutes after the fall I did see it give a try to move and flap one wing. But, just for a second or two. I know it was suffering and feeling a lot of pain. The shine in the eye slowly faded and in about 20 minutes or so it was gone. I continued watching the nest with five offspring for another 30 min or so and thought about what just happened. Then I packed up my gear, took a paper bag and placed the dead heron in it. I wasn't going to leave it there to wind up in a garbage can and be taken to the landfill, or worse … road kill. I took it home, and found a spot in the backyard, close to the pond by a hydrangea bush and underneath a hackberry tree. 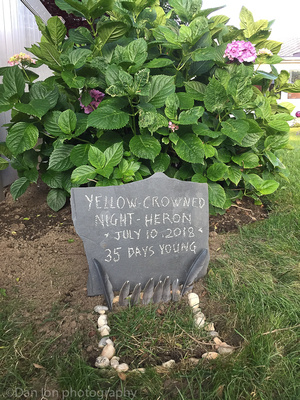 Final resting place in my backyard. Headstone will be there for a few days.

I dug a two foot deep hole in the ground and gave it a proper burial. It was very hard to see it happen and as I write this my eyes are a bit watery. It's just hard to see, especially when one has some sort of a connection to the animal. I clearly understand that that's how nature works, every day all the time. It's just the way it is. But for the moment and the day it was sad to see. Link to YCNH gallery here.

Click on the images to see at full size.

Many more images covering both blog posts are in the Yellow-Crowned Night-Heron gallery here.